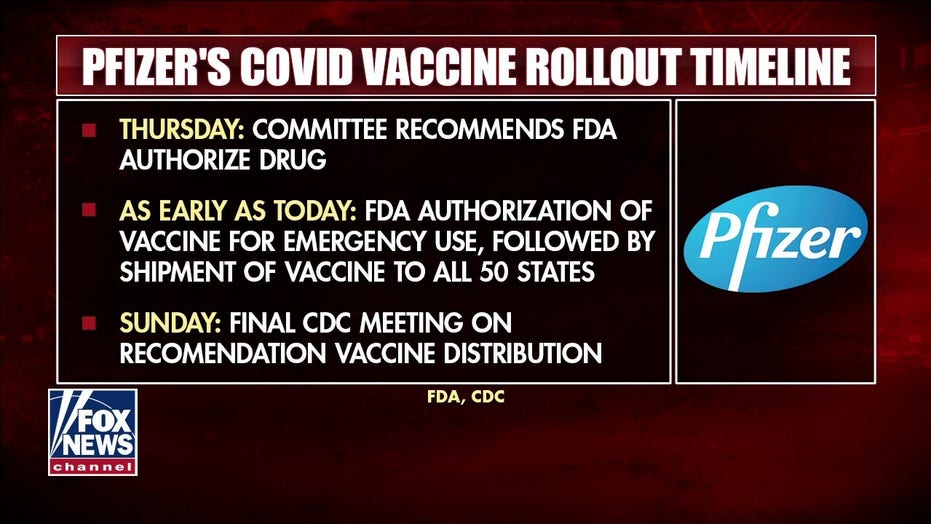 When will the treatment be available to the public? Infectious disease expert Dr. Amesh Adalja provides insight.

The vaccine has been recommended to be distributed first to health care workers and residents and staff of long-term care facilities.

The FDA's move came just one day after an advisory panel to the agency voted to endorse the Pfizer-BioNTech product.

, Pfizer must still show whether the vaccine works in children younger than 16 and in pregnant women. (iStock)

Soon after Friday's announcement, President Trump released a video on Twitter, hailing the development in the nation's monthslong fight against the virus as a "medical miracle."

"We have delivered a safe and effective vaccine in just nine months," the president said. "This is one of the greatest scientific accomplishments in history. It will save millions of lives and soon end the pandemic once and for all."

"We have given Pfizer and other companies a great deal of money, hoping this would be the outcome, and it was," Trump added.

The president said the vaccine will be "free for all Americans," with the first doses administered "within 24 hours."

"The pandemic may have begun in China," Trump said, "but we are ending it right here in America."

"The pandemic may have begun in China but we are ending it right here in America."

House Speaker Nancy Pelosi, D-Calif., called the FDA's emergency authorization "a tribute to the tireless efforts of scientists and doctors," adding, "We must ensure that the vaccine will be free and distributed in a fair and equitable manner."

Vaccinations are expected to begin as early next week, federal officials have said.

The formal approval makes the U.S. the fourth country worldwide to approve emergency use of the jab, following Britain, Bahrain and Canada.

The FDA’s approval was initially expected Saturday. However, White House Chief of Staff Mark Meadows reportedly told FDA Commissioner Stephen Hahn on Friday to submit his resignation if the agency did not approve the vaccine by the end of the day, according to the Washington Post.

Hahn in a statement provided to Fox News denied these claims, however, saying the report was “an untrue representation of the phone call with Meadows.

“The FDA was encouraged to continue working expeditiously on Pfizer-BioNTech’s EUA request. FDA is committed to issuing this authorization quickly, as we noted in our statement this morning,” the statement said.

The FDA advisory panel on Thursday was charged with voting on the following question: "Based on the totality of scientific evidence available, do the benefits of the Pfizer-BioNTech COVID-19 Vaccine outweigh its risk for use in individuals 16 years of age and older?"

Though the vote eventually passed 17-4, (one committee member abstained), several committee members took issue with the aspect of approving the vaccine for use in 16- and 17-year-olds due to limited evidence. Others argued that the 16- and 17-year-olds wouldn't be among the first to receive the vaccine, allowing for time to research the effects it may have on this age group.

The vaccine proved 95% effective in late-stage clinical trials, the companies announced late last month. Pfizer and BioNTech were the first to apply for emergency use authorization from the FDA. Another efficacious vaccine candidate developed by Moderna followed suit, becoming the latest contender to file for EUA.

The FDA is set to meet next Thursday to review the Moderna vaccine. A third candidate, from Johnson & Johnson, which would require just one dose, is working its way through the pipeline. Behind that is a candidate from AstraZeneca and Oxford University.

U.S. health experts are hoping a combination of vaccines will ultimately enable the U.S. to conquer the outbreak.

WHAT'S THE DIFFERENCE BETWEEN MRNA VACCINES AND CONVENTIONAL ONES?

As for the Pfizer-BioNTech shot, the FDA committee vote to approve the companies’ EUA was expected, with documents posted ahead of the agency’s scheduled Dec. 10 meeting showing that the candidate met the FDA’s requirements for emergency use.

The documents did not flag any new concerns or safety issues regarding the vaccine after reviewing the submitted data.

The agency found no specific safety concerns among subgroup analyses but did list several unknowns that will need to be investigated further, including duration of immunity, efficacy in certain high-risk populations, those previously infected, as well as effectiveness among asymptomatic infection, long-term effects of COVID-19 disease, mortality and transmission of SARS-CoV-2.

Fatigue, headache, muscle pain, chills, joint pain and fever were all listed as reported adverse reactions but were categorized as mild to moderate. Serious adverse events remained uncommon and “represented medical events that occur in the general population at similar frequency as observed in the study.”

That said, in Britain, at least two adverse reactions occurred on the first day of the country's mass vaccination program that began this week, leading regulators in the country to advise that people who have a "significant history'' of allergic reactions should avoid receiving the new Pfizer-BioNTech vaccine at this time.

Additionally, Pfizer must still show whether the vaccine works in children younger than 16 and in pregnant women.

Fox News’ Alexandria Hein and Kayla Rivas, and The Associated Press contributed to this report.