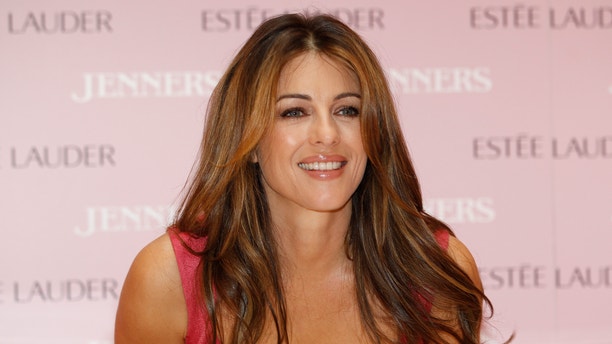 She's been the face of the Estee Lauder Cos.' breast-cancer awareness and fundraising efforts for 18 years.

"This is a part of my life. I look forward to the month. Over the years, my commitment has become more significant," Hurley says.

The calendar is marked off for the entire month, the actress says, and she makes no other plans, although she's hoping to squeeze in a diner breakfast on this trip to New York City.

Hurley, 47, was at the Empire State Building on Monday wearing a plunge V-neck, gathered-waist Issa jersey dress to flip the switch to turn the lights pink. She did it two years ago with Evelyn Lauder, who died last November.

Lauder co-founded the Pink Ribbon Campaign 20 years ago, and since then, more than 122 million free pink ribbons have been handed out at department-store cosmetic counters as a reminder about breast health and the research being done for a cure, Hurley says.

"We were a great double act. This is bittersweet. ... She was a wonderful person, and I hope a little bit rubbed off on me."

Without Lauder, Hurley finds herself busier this month, with planned stops in Toronto, London and Paris, among others. The campaign reaches 70 countries.

The campaign has found much success raising money for research: $35 million so far, Hurley says, though, it's with each mammogram made by a woman who might otherwise have forgotten or resisted to make that call for her appointment that she feels a greater sense of accomplishment.

William Lauder, Evelyn's son and executive chairman of the cosmetics company, says he gets a little thrill — and a giant burst of pride — every time an NFL football player puts on a pair of hot pink gloves or uses a pink towel to support the breast cancer campaign.

He remembers his mother establishing the Breast Cancer Research Foundation in 1993 and making it her life's work.

It now seems hard to imagine an October not washed in pink, Hurley and William Lauder agree.

There's also a perk in all the pink lip gloss that goes along with the campaign, adds Hurley. There's one this year named for her called Pink Innocence.

"I love it when I get the new gloss, and when I see other people wearing it."

An interactive exhibition looking back at the 20 years of the Breast Cancer Awareness campaign is open to the public Tuesday and Wednesday outside the GM Building on Fifth Avenue.