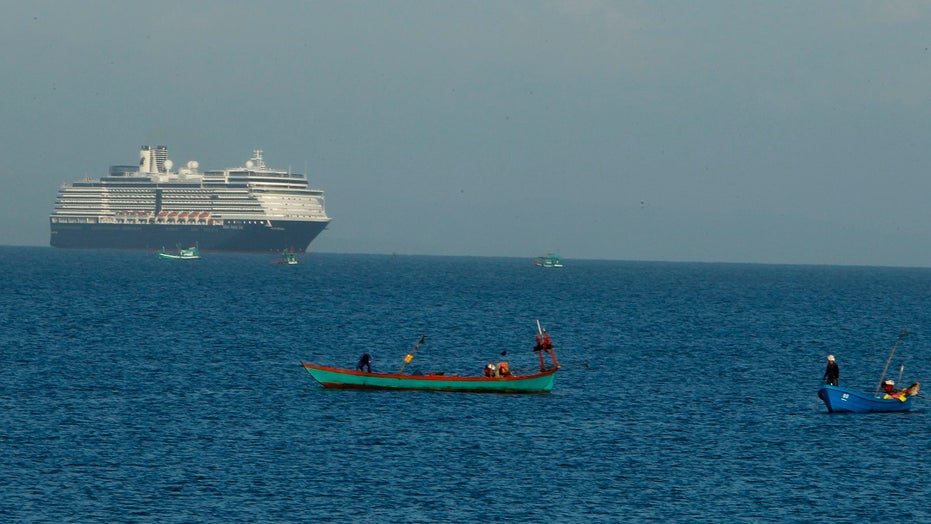 A cruise ship that was turned away by four Asian governments over concerns its passengers could be infected by the coronavirus docked in Cambodia Thursday morning.

The more than 2,220 passengers and crew aboard the MS Westerdam anchored less than a mile from the main Sihanoukville port and will undergo health screenings before being allowed to disembark.

U.S. Ambassador to Cambodia W. Patrick Murphy tweeted Wednesday that Cambodia authorized the ship to dock at the port after the ship had been rejected by Thailand, the Philippines, Taiwan and Japan

Several American citizens are aboard the ship, Murphy said, but did not specify how many.

In a follow-up tweet, Murphy said the U.S. Embassy in Cambodia will work with authorities and the cruise line in assisting the U.S. citizens in transferring to their onward destinations.

The vessel had been unwelcome by the four nations despite assurances from operator Holland America that no COVID-19 cases had been confirmed among those on board.

The MS Westerdam sails off Sihanoukville, Cambodia on Thursday. Holland America Line said the ship has been turned away by the Philippines, Taiwan, Japan and Thailand, though its operator said no cases of the disease have been confirmed among the more than 2,200 passengers and crew. (AP Photo/Heng Sinith)

"All guests on board are healthy and despite erroneous reports there are no known or suspected cases of coronavirus on board, nor have their [sic] ever been," the company said in a statement to Fox News.

The passengers will be able to transfer to charter flights to Phnom Penh where they can catch flights home, the cruise line said. It said it will arrange and pay for the flights and will issue refunds for the 14-day cruise, along with credits for future cruises.

A passenger on the Westerdam expressed relief at the news the ship would be docking in Cambodia.

"Homeward bound! The #Westerdam is headed for Cambodia," she tweeted. “We're told by the captain that it may take a few days to get everyone on chartered flights to Phnom Penh and then home. Elated at the prospect of touching land tomorrow. Until then, I'll work on my towel animals.”

Thailand had said Tuesday that it would not allow the MS Westerdam to dock at a Thai port after it had already been turned away by the Philippines, Taiwan and Japan. Cambodia will allow passengers to disembark there.

Another cruise ship, the Diamond Princess, has been quarantined at Japan's port of Yokohama for several days. Authorities have confirmed 174 coronavirus cases aboard the ship. The virus has killed more than 1,100 people and sickened thousands, mostly in mainland China.

Aside from cruise ships, many airlines have halted flights to China. United Airlines announced Thursday it was extending its suspension of flights to Hong Kong until April 24.

Cambodian Prime Minister Hun Sen, a strong supporter of China, has played down threats from the virus, which originated in the Chinese province of Hubei. Unlike other nations, he has declined to ban direct flights from China.

Cambodia has one confirmed case of the virus, which came from a single Chinese visitor.