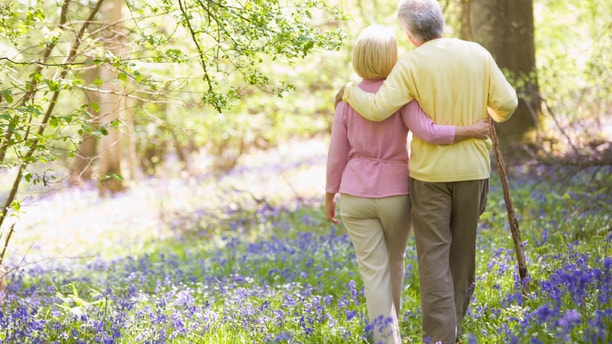 As couples grow old together, their happiness levels also wax and wane in sync, a new study suggests.

The findings suggest a possible resource that hasn't been tapped for promoting healthy aging. Similar to a pill or other treatment, a chipper spouse may boost a partner's feelings of well-being.

While the findings may seem obvious, lead researcher Christiane Hoppmann said this phenomenon hadn't been studied over a long period, following the same couples over time instead of just looking at snapshots or asking couples to look back over their lives and recall well-being. [5 Things That Will Make You Happier]

"There are all kinds of changes in perception that occur over the course of a marriage that make you look at it differently in retrospect," said Hoppmann, who is in the department of psychology at the University of University of British Columbia in Vancouver.

Marriage and aging
"What's interesting to me is that there's this disconnect between psychologists interested in marital relationships and what we as aging researchers tend to do," Hoppmann told LiveScience.

So she and her colleagues turned to the Seattle Longitudinal Study, an aging study where data is collected every seven years, to look at couples' happiness as they aged.

The researchers analyzed data of 178 married couples (356 participants in total) followed over a 35-year period between 1956 and 1991. Happiness was gauged with the question, "Would you describe your life until the current year as being ..." Answers ranged from 1 to 5, with 1 being "very happy" and 5 indicating "very unhappy."

The researchers also accounted for age, education, children and length of marriage.

They found that if one spouse reported high levels of happiness, the other spouse inevitably said the same. Likewise, if one member of a couple showed a dip in happiness compared with an earlier survey, so did the partner. Spousal happiness levels and changes in happiness were much more similar than those found between randomly selected men and women.

As people age and their health inevitably suffers, the researchers expected happiness would also take a hit. But the results showed that while there were some ups and downs within individual couples, average happiness for the group didn't change much over time.

Research by Hoppmann not yet published in a scientific journal suggests a sort of contagion. The results showed that, for example, if one spouse has a decline in health, it is associated with depressive symptoms in the other spouse.

"If someone is restricted in their own mobility that also impacts the happiness of the spouse," Hoppmann said.
Aging couples even tend to look alike, similarities that grew the longer spouses were together, other research has shown.
The researchers also hope to do follow-up studies to find out whether marriage is good for a person's health. For instance, can a person who is very happy lift up their spouse and can that serve as a resource in old age? And can that go both ways—for example, would a person who is having a hard life drag their partner down?

The team also wants to know whether the happiness link works only for long-term relationships. Many baby boomers who are now in their 50s and 60s have had multiple relationships, with some becoming widowed or divorced and later remarrying. Preliminary results from Hoppmann's work with a collaborator suggest this shared well-being isn't the same for couples with multiple past relationships.

"It tells us as aging researchers that we need to go beyond looking at individuals when we're interested in what makes people age successfully," Hoppmann said. "We need to take into account how [significant] others change over time."

* 7 Ways the Mind and Body Change With Age
* 10 Things Every Woman Should Know About a Man's Brain
* Global Study: Money Doesn't Buy Happiness