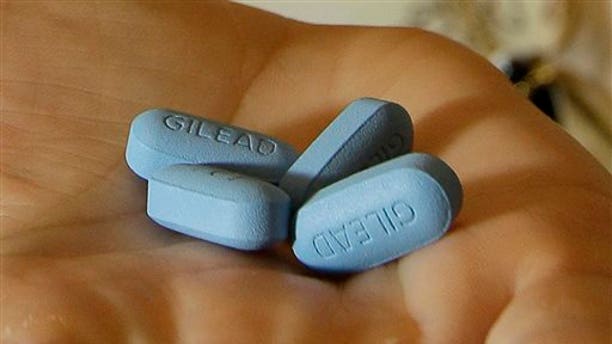 In this Thursday, May 10, 2012 file photo, a doctor holds Truvada pills at her office in San Francisco. (AP Photo/Jeff Chiu)

The odds of getting HIV can be dramatically reduced by taking two pills prior to sex and two more after, according to a new study of 400 high-risk gay men and transgendered women published online by the New England Journal of Medicine in conjunction with World AIDS Day.

The medication is Gilead's Truvada, a combination of tenofovir and emtricitabine, approved by the U.S. Food and Drug Administration in 2012 to prevent HIV infections and intended to be given daily.

The study suggests that may not be necessary, and the pills can be taken as needed.

"This is a great study that shows a high level of protection, higher than we've seen before," Dr. Nicholas Van Sickels, an infectious disease specialist at Tulane University in New Orleans, told Reuters Health in a telephone interview. "It's the first big published study to offer an alternative" to daily therapy, said Dr. Van Sickels, who was not connected with the research.

As-needed treatment "was nearly close to full protection," chief author Jean-Michel Molina of Hopital Saint-Louis in Paris told Reuters Health by phone. "We could say it offers similar protection to a condom, although a condom protects against other sexually-transmitted diseases as well."

However, the study, which used placebo pills for comparison, did not directly compare protection rates to people who took Truvada daily. Gilead helped finance the test.

Past research had suggested that once-a-day therapy worked no more than 42% of the time because people weren't taking their pills, said Molina. "Our assumption was that using on-demand treatment would be a way to improve adherence. They would take the drugs when they needed it, before and after sexual exposure."

Dr. Aaron Tobian of Johns Hopkins University School of Medicine, who was also not involved in the study, cautioned that the results might be different in real-world settings, telling Reuters Health in an email that it will be important to see if such therapy "is effective for preventing HIV infection among individuals not participating in a clinical trial."

In the new study, the volunteers from France and Canada were instructed to take two pills with food two to 24 hours before sex, followed by a third pill 24 hours later and a fourth 24 hours after that. If the sexual encounters continued, they were told to take their pills once a day until two days after the sex ended.

All were given condoms and counseling to further reduce their infection risk.

Since the study began in 2012, the researchers reported, Truvada reduced the infection rate by 86%. But that reflects the prevention of just 12 cases. The number is small, in part, because the rules were altered in mid-study to allow all volunteers to take the drug. The reason: preliminary results, along with the findings from other research, made it clear that it would be unethical to deny the medicine to people at risk for infection.

While 14 of the 201 people taking placebo pills became infected with HIV, there were only two infections among the 199 in the Truvada group. And those two men in the Truvada group never took the drug, so the success rate could be considered even higher, Dr. Molina said.

The volunteers were typically followed for just over 9 months. The study will continue to June, he said.

Volunteers taking the drug reported nearly three times as many gastrointestinal problems such as nausea, diarrhea, vomiting and abdominal pain as placebo recipients. They were also more likely to develop signs of kidney problems.

The study, known as IPERGAY, did not find that the drug affected volunteers' risk of acquiring other types of sexually transmitted infections: 81 of the 400 picked up chlamydia, 88 developed gonorrhea, 39 acquired syphilis and five got hepatitis C.

The short duration of the study may have elevated the estimated protection rate "due in part to high initial adherence," the researchers cautioned.

Because the study was unable to assess the long-term toxicity of the drug, "ultimately safety concerns will have to be balanced against potential benefits from HIV-1 prevention," they said.

"We now have a choice of daily or on-demand, and to offer more choice is great" for gay men, Molina said.

"People are telling us they are more relaxed when they have sex," said Molina. "They are less concerned that they will get HIV."

But he cautioned that the results may not apply to heterosexual men or women.

About 1.2 million people in the U.S. are infected with HIV, 20 percent more than a decade ago. More than two thirds of the new cases involve men who have sex with men. Over 2 million people acquire the infection worldwide each year.