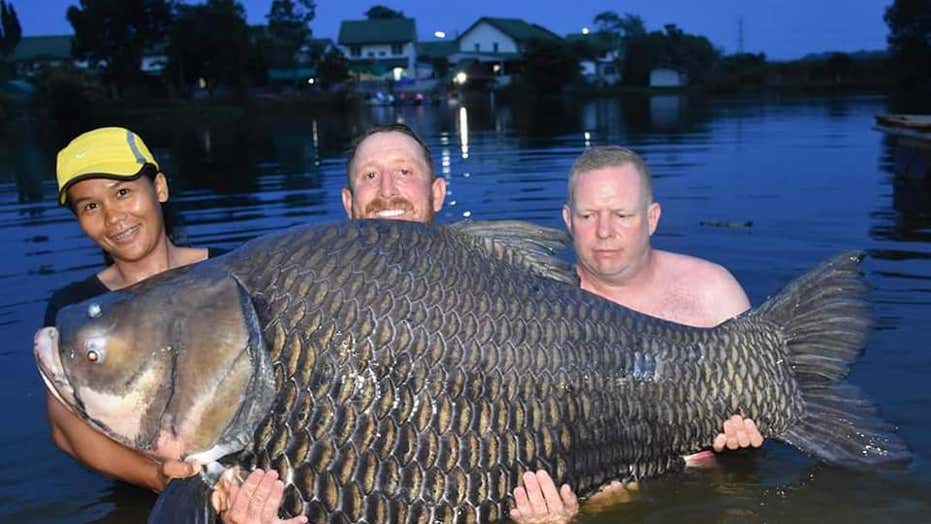 A vibrant blue fish was carried off to what was presumably its demise by a powerful osprey, its giant talons gripping the pancake-shaped sea creature as the bird's golden-yellow eyes pierce the camera. That's what photographer and bird watcher Michiel Oversteegen captured on his camera near Arashi Beach, Aruba.

A British man reeled in a 232-pound carp fish in Thailand last month — a reportedly record-breaking size believed to be the world's largest caught carp fish.

John Harvey, 42, was fishing at a lake in June when he captured the heavy Siamese carp.

EXPERT DETERMINES MAN'S GIANT CATCH TO BE RARE, OLD FISH: 'I HAD NEVER SEEN SOMETHING LIKE THAT'

“It was a reasonably quiet day for fishing. Then, at around 4:30 p.m., the cart rod screened off so I ran over to the rod, and straight away felt it was a really big fish," Harvey told Devon Live. "I've done fishing for a while now and you can tell if it’s big or not from the bait."

Harvey said "it was very slow, hard, heavy fish," and noted he "had to hang on to it for one hour 20 minutes which was pretty nerve-racking."

According to the news outlet, Harvey's fish outweighed the previous record-breaker by 10 pounds.

The man, who said he's lived in Thailand for 14 years, said the photos of the fish "do not do it justice at all."

“It was amazing. I’ve never caught a carp that weighed over 100 pounds before," Harvey said.  “I just want to go out there and enjoy it. People travel the world trying to catch the biggest fish, but that takes the fun out of it."