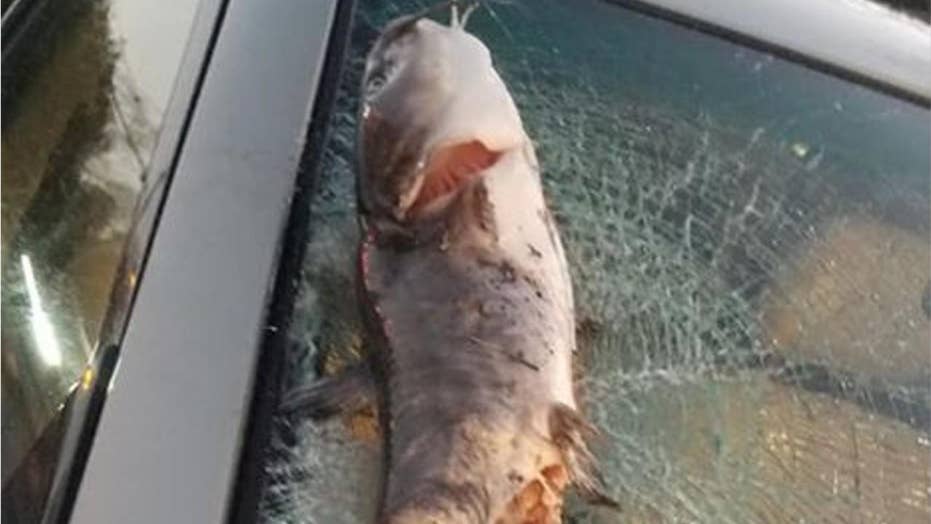 A North Carolina woman claims a flying catfish smashed into her car windshield.

It's apparently the perfect time to go fishing for glory in North Carolina.

The North Carolina Wildlife Resources Commission (NCWRC) confirmed the news on Monday, congratulating both outdoorsmen for their accomplishments.

MISSOURI FISHERMAN SETS RECORD WITH FISH THAT FITS IN THE PALM OF HIS HAND: 'MY FRIENDS THOUGHT IT WAS A JOKE'

Joey Baird was out fishing at Six Pound Creek at Lake Gaston on July 5 when he caught a blue catfish measuring a whopping 121 pounds and 9 ounces, 60 ½ inches in length and 40 ½ inches in girth, the NCWRC said in a statement.

Historically, Lake Gaston has been home to “some massive blue catfish,” the wildlife resources commission said, as Baird’s catch is the fourth state record-smashing blue catfish to be caught from the lake.

Two weeks later, Tyler Barnes reeled in a massive flathead catfish from the Neuse River on July 20. The Pikeville man’s fish measured 78 pounds and 14 ounces, at 52 inches in length and 37 inches in girth.

The angler hooked the beast with live sunfish as bait.

In catching the creature, Barnes also smashed a 15-year freshwater fish state record for a flathead catfish, the NCWRC reported. The record was previously held by a 78-pound flathead hooked in the Cape Fear River in September 2005.