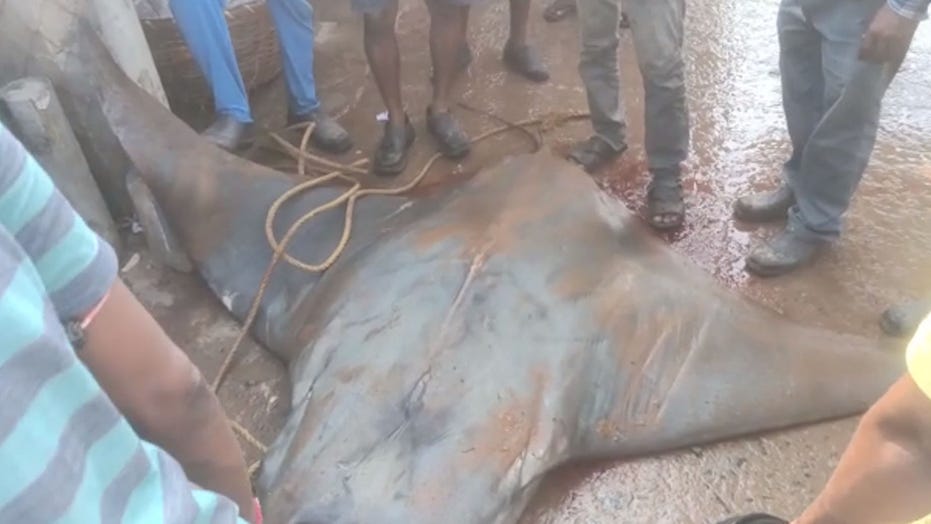 This fishing trip definitely paid for itself.

A group of fishermen in India reeled in an impressive manta ray that reportedly weighed in at nearly 1,800 pounds. After catching the impressive animal, the men sold it for a substantial amount of money.

The manta ray was caught off the coast of Digha, a coastal town in the East Medinipur district, Southwest News Service (SWNS) reports. (SWNS)

The manta ray was caught off the coast of Digha, a coastal town in the East Medinipur district, Southwest News Service (SWNS) reports. The animal reportedly weighed 1,763 pounds.

The fishermen were reportedly able to sell the manta ray for about $26,000 at a nearby market.

Footage captured after the group returned to shore shows them standing around the massive creature as they appear to struggle to move it across the dock.

This is just the latest encounter between a fishing vessel and a large animal.

Fox News previously reported that Chris Clarke was fishing off the coast of Lyme Regis in England when a humpback whale breached near his boat, South West News Service (SWNS) reported. He had reportedly set out on Friday, July 24, but didn’t see the whale until Sunday evening.

“We'd been up all night working and we saw them going past,” he told SWNS. “It certainly woke us up a bit. Two of them were a way off, but one swam right past us, and leaped out the water.”

Fortunately, the moment was caught on camera.

Clarke continued, “I've seen lots of dolphins and seals, but I've never seen a whale before. I never thought I was desperate to see a whale but I'm really glad that I have.”