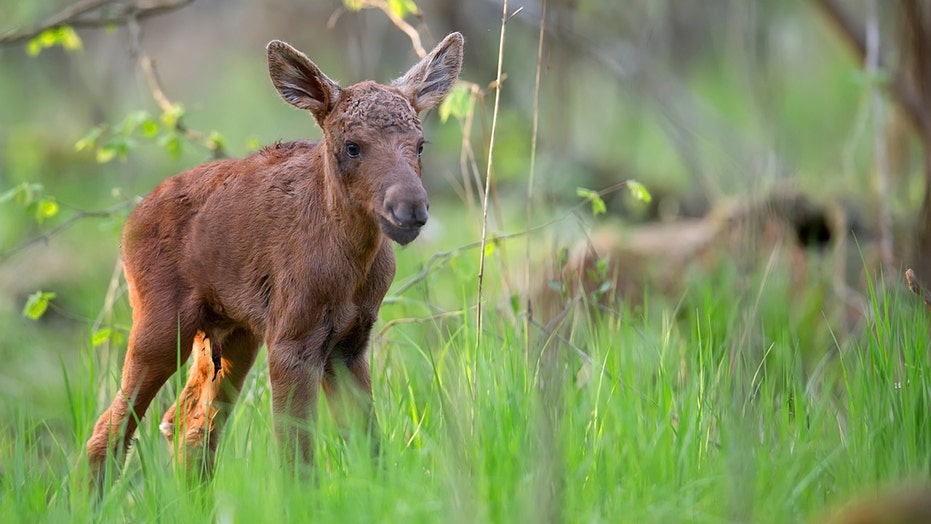 A struggling baby moose recently got a helping hand.

Last week, pictures of a man in Alaska lifting a moose calf over a highway guardrail were posted on Facebook.

According to Andrea N Salty Bock, who posted the pictures on Facebook, the calf and its mother were near Clam Gulch, on the Kenai Peninsula. The mother was apparently trying to get her baby to go over the guardrail, but it was too tall for the calf.

SUMMER CAMPS RETURN BUT WITH A FEWER CAMPERS AND COUNSELORS

"Traffic stopped to give her the room she needed," the Facebook post said. "But the calf could not clear the guardrail."

"After nearly 30 min of frantic pacing back-and-forth and the line of traffic growing more and more by the minute a gentleman from the northbound lane of traffic came and gave the calf some assistance," the post continued. "He waited for the right moment in time when the mom was on the other side of the highway. Traffic blocked her view as he quickly grabbed the calf & placed her over the guardrail with her mother."

According to KTUU, the man was Joe Tate and was heading home on Sunday after a day of fishing.

Tate told the station that as he was driving, he came up to a line of cars and the mother moose in the road. When he looked closer, he noticed the baby on the other side of the guardrail.

"It was tired," Tate told KTUU. "It was very, very young. Maybe a week and a half old."

Though he considered calling the Alaska Wildlife Troopers or the Department of Fish and Game, Tate was worried the moose, or one of the drivers, would get hurt in the time it would take officials to arrive at the scene.

Instead, he and his friends decided to step up and help themselves.

According to KTUU, his friends drove their trailer between the mother and calf so the mother couldn’t see her baby while Tate went over the guardrail towards the calf.

A man in Alaska recently lifted a moose calf (not pictured) over a guardrail that was too tall for the calf to cross itself. (iStock)

Tate told the station that the calf was so tired, it just came right up to him and let him lift it over the railing.

As soon as the calf was steady on its feet, Tate left immediately so it could go back to its mother on its own, KTUU reported.

Thankfully, the mother didn’t reject her baby after it had contact with Tate, according to the station.

"It was calculated," Tate told KTUU. "It was something we kind of looked at and talked about before we did it. It worked out for the best."

"It could have gone bad, and I understand and know that," he added. "But it did go for the best, and it was worth the risk that I took."

According to KTUU, Tate’s actions were dangerous -- the mother moose could have attacked him. However, he is something of an outdoorsman and has been living in Alaska since 2005.

"Nowhere near expertise," he said. "But I had some knowledge of what to do and what not to do, and handled it the best it could be done."

It is illegal to handle wildlife in Alaska. People who handle or "possess" wildlife can be charged and punished for a misdemeanor, KTUU reported.

However, Alaska Wildlife Troopers Lt. Chris Jaime told the station that the agency doesn’t plan to punish Tate, since it was for a good cause.

"We’re not gonna track this guy down and issue him a citation for doing this," Jaime said.

Regardless, KTUU reported that officials are asking people to not follow Tate’s example.