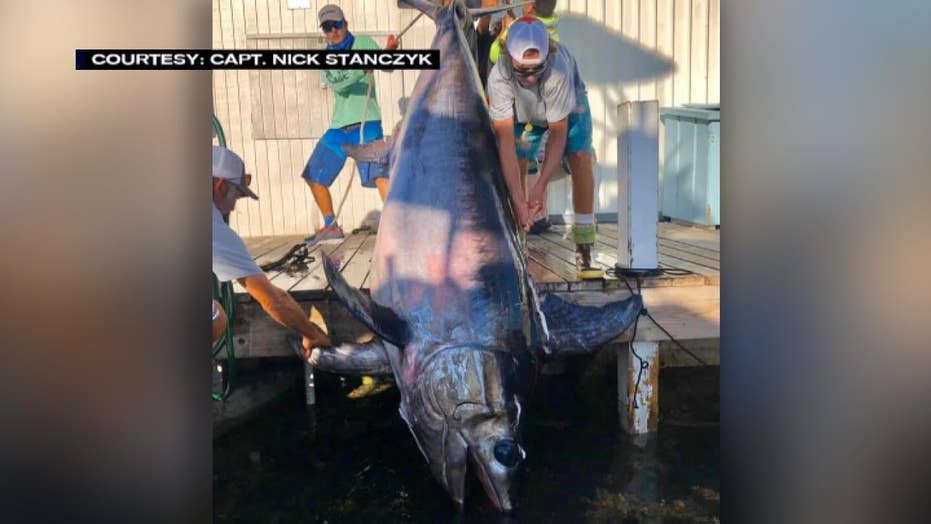 Monster fish caught off the Florida Keys is the biggest in the recorded history of Florida waters.

A fisherman in the Florida Keys spent eight hours reeling in a genuine sea monster.

On March 31, Captain Nick Stanczyk took a group of clients out on his charter boat, unaware that he was about to make the catch of a lifetime. He led them to a location off the coast of Islamorada, Fla., a known spot for swordfish sightings. About 10 minutes after setting the bait, Stanczyk noticed they had a bite.

Initially, he was unaware of just how big the fish was. After about 40 minutes, he got his first look at the electric blue swordfish, and guessed that it weighed somewhere around 400 pounds. Over the next several hours, the beast would continuously dive deep and then come storming back up to the surface, but it never broke free from the line.

After five hours, the crew finally got their first real glimpse of the creature and realized that it likely weighed over 600 pounds. At this point, the swordfish started to charge the boat. Stanczyk kept his clients focused, and they were able to keep the fish hooked.

It took eight hours, but Stanczyk and his clients Bill and Debbie Lussier were finally able to harpoon the giant and use a pulley to bring it onto the boat. By that point, the struggle had caused the vehicle to drift 20 miles away from its starting location. When they got back to shore, it took seven people to get the fish off the boat, but it ended up being worth it.

The fish weighed in at an astonishing 757.8 pounds, a personal record for Stanczyk, and a new Florida record, according to The Miami Herald. To celebrate, he cooked up some swordfish steaks on the grill. Hopefully his family liked it, because they had plenty of leftovers.