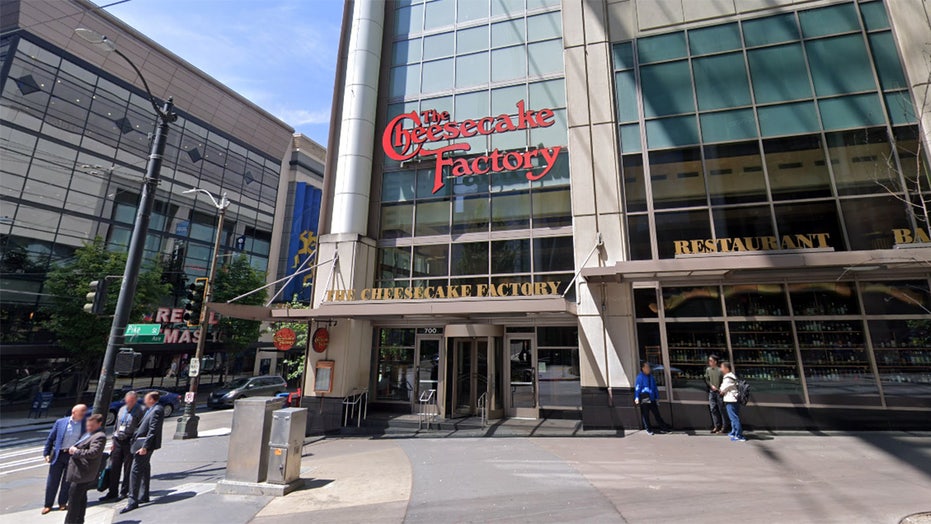 A woman who allegedly participated in the looting of a Cheesecake Factory cheesecake during protests in Seattle has become an unlikely Internet star over the weekend.

The woman, who was not identified, was filmed by a crew with KIRO-TV on Saturday, gently carrying what appeared to be an entire strawberry-topped cheesecake down the street, a block away from the location of a Cheesecake Factory on Pike St. in downtown Seattle.

During the broadcast of the footage, a KIRO-TV reporter noted that the Cheesecake Factory had been looted, though she admitted that it was “unclear” where the woman may have obtained the cheesecake. She also appeared to be carrying a wine glass, a champagne flute, and a small vase.

KIRO-TV further reported that the restaurant was just one of many businesses in the area to be vandalized following what was reportedly “several hours of peaceful gatherings and marches” in Seattle.

Following the broadcast, a clip of the woman began making the rounds on social media, much to the delight of Twitter.

Others pointed out that they were firmly against the practice of looting, but still appeared to enjoy the sight of the cheesecake-carrying woman.

A representative for the Cheesecake Factory declined to comment on the footage.

The woman was filmed carrying what appeared to be an entire strawberry-topped <a data-cke-saved-href="https://www.foxnews.com/food-drink/twitter-salivates-over-cheesecake-rock" href="https://www.foxnews.com/food-drink/twitter-salivates-over-cheesecake-rock" target="_blank">cheesecake</a>, only a block away from the location of a Cheesecake Factory on Pike St. in downtown Seattle. (Google)

Protests over the death of George Floyd began erupting in cities across the country last week, after Minneapolis police officer Derek Chauvin was filmed kneeling on Floyd’s neck for several minutes while Floyd repeatedly stated that he was unable to breathe. Riots have also broken out in cities, with looting and vandalism reported.

A mandatory citywide curfew was enacted in Seattle on Sunday night into Monday morning in response to concerns over violent protests. The latest curfew expired Monday morning at 5 a.m., KING-5 reported.