Pinterest recipe for fried pickles has been saved almost 100,000 times 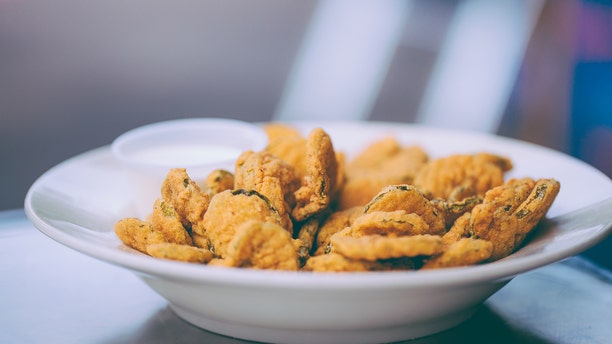 Pinterest says “saves” for their pickle recipes have risen 114 percent over the years. (iStock)

Pinterest has long been known as a recipe goldmine. Bloggers, home cooks, and canners share a myriad of recipes for chain restaurant dupes, tasty vegan snacks, and one-pot meals on the seemingly never-ending photo-sharing platform. Some recipes found on Pinterest even go viral. Such is true of this copycat recipe for Texas Roadhouse’s fried pickles that has been saved over 98,000 times.

According to Refinery29, Pinterest says “saves” for their pickle recipes have risen 114 percent over the years. We have seen the rise in pickle popularity recently manifested in Walmart’s fruit punch pickles and Sonic’s new pickle juice slushies.

Pinterest’s popular fried pickle recipe was posted on the blog All She Cooks but is originally adapted from a Food Network recipe. Clicking through from Pinterest will take you to the blog post, which features a recipe for both the pickles and a suggested dipping sauce.

The relatively simple recipe calls for dill pickle chips to be coated in a breading mixture of flour, Cajun seasoning, basil, oregano, cayenne pepper, and kosher salt and then fried. The dipping sauce is made by mixing mayonnaise, horseradish, ketchup, and Cajun seasoning together.

Despite its almost 100,000 saves, the recipe only has 28 comments. Some are brutally honest — one claims the pickles turned out “terrible,” while others offer tips to make the fried pickles more true to the Texas Roadhouse recipe, such as adding milk to the flour mixture or freezing the pickles before frying them — but many of the comments are positive.

“Surprisingly great flavor,” reads one comment. “With the simple recipe I didn't expect much but I experimented with 3 fried pickle recipes & these were the best. Lotsa flavor & thin crisp skin.”

“Our favorite to make at home! Sauce is good too!” reads another.