Philanthropy and drinking becoming a good mix at bars 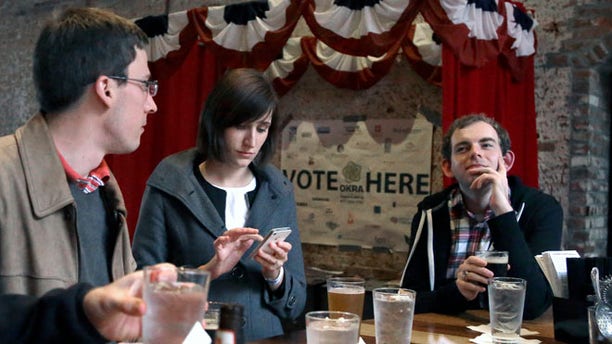 Dec. 13, 2013: In this photo, Jesse Mello, left, Erin Holt, center, and Matt Pankey enjoy drinks at The Original OKRA Charity Saloon in Houston. The gives 100 percent of its profits to charity and is set to donate more than $300,000 after its first year. (AP)

It's become a place where you can eat, drink and be merry — but also give to charity.

Since opening its doors last December, a Houston bar that donates 100 percent of its profits to local charities has far exceeded expectations, helping turn cocktails and glasses of wine and beer into warm blankets and hot meals for those in need.

By the end of this year, the Original OKRA Charity Saloon will have donated about $300,000 to a dozen organizations. The group that runs the saloon — a collection of some of the city's best-known bars and restaurants — had expected to donate only about a third of that amount in its first year.

"It was a good year. It's pretty amazing," said Mike Criss, the bar's general manager. "It's just the community coming together."

The charity saloon is one of several bars around the country using that business model as a way to give back. There are similar bars or concepts in New Orleans, Washington, D.C., and Portland, Ore.

The Houston saloon, which this year was named one of the country's best bars by Playboy magazine and got a shout-out on the "Colbert Report," has four charities competing for donations each month. Customers vote for a winner, who gets the following month's proceeds.

The Oregon Public House, a similar bar in Portland, has also had success — donating more than $15,000 to charities in its first six months of operation.

"I believe in this model, not just for us but for my city, for our state, for our country," said Ryan Saari, director of The Oregon Public House's board. "I think there is a lot of good that could be done, stepping outside of the box a little bit in terms of how we support and fund our nonprofits."

For A Simple Thread, a small Houston nonprofit that distributes kits with everyday items such as socks, toothbrushes and books to homeless individuals, the $16,000 it got from the OKRA Charity Saloon allowed the group to do more. But it also empowered its volunteers, whose presence at the bar every day during the month it competed helped convince many customers to vote for them.

"We've never had that much money. It gave us the ability to do more for the people that we help," said Jacquie Brennan, the group's founder and board president. "It gave us, as the smallest organization that ever won this thing, confidence in ourselves."

Brennan said the bar's donation helped her organization, formed in 2008, buy and distribute items that it normally might not be able to give away, including sweatshirts and sweatpants, gifts cards to McDonald's and passes to ride the city's bus system.

"We know we're not ending homelessness," said Brennan, who works as a lawyer. "We're not providing shelter. We're not making everything OK for them forever. We're just being kind ... to people who need your help."

That kindness was welcomed during distribution of the group's kits recently at a downtown-area park frequented by homeless individuals.

As soon as Brennan pulled up in her Prius — which local homeless individuals now recognize — about 10 to 15 men and women quickly ran up to the vehicle and gratefully claimed the kits. The group also passed out blankets — which were gone in seconds — as well as disinfecting wipes and magazines.

One man hugged Brennan after getting his kit, while another said, "Love you all."

For the Houston chapter of U.S. VETS, a national nonprofit that provides services to homeless and at-risk veterans, the effort it put in to win the $35,000 it received helped bring attention to the group's work, said Tom Mitchell, the chapter's executive director.

"It was a rallying point for veterans groups in the community," he said. "It also helped us get some good PR."

The donation is being used to help pay the salary of a chef for the nonprofit's new kitchen at its main campus, located in a refurbished hotel.

That new chef, 55-year-old Aubrey Foote, is a veteran himself who served in the Army and has utilized U.S. VETS' services.

As he chopped cabbage that would be served at lunch during a recent weekday, Foote said he believes the quality meals he prepares help show veterans working to rebuild their lives that they have not been forgotten.

"They feel that someone cares for them," he said.

Criss and Saari said they believe charity bars will be embraced by other communities. They've already received calls from people in Canada, England, France and India interested in the concept.

"We never thought it would be this big, where it is right now," Criss said. "I'm still amazed."