Foods you didn't know were named after people

Whenever a new food item is invented or discovered, be it a completely new dish or a new variety of fruit or vegetable, it needs to be named.

Some people, if they’re feeling scientific, go with a variation of a Latin origin.

More literal-minded folks just name it whatever’s closest to what the product is (see “meatloaf”).

Others choose a name that honors a specific person, be it a nobleman or monarch, the inventor, or someone else entirely. We bet that a lot more foods fall into the last category than you might think, and we’ve rounded up some of the best.

Some foods that were named after people are pretty darn obvious. For example, there’s no mystery about who Cherry Garcia’s name was inspired by. But for other foods it might not even cross our minds that there’s someone who inspired its name. Take beef Stroganoff, for example, the Russian dish of beef in a sour cream sauce. It was named after a real guy named Count Stroganov. Heck, even the Kentucky Hot Brown, an open-faced sandwich, was named after J. Graham Brown, the owner of the hotel where it was invented. And when an Oregon-based horticulturist named Seth Luelling developed a new breed of cherry in 1875, he decided to name it after his Chinese assistant, Bing.

It’s amazing how many dishes named after people have come and gone, generally never to be heard from again. Ever hear of an English sweet popular in the early 1800s called Bonaparte’s ribs?  How about peach pudding a la Cleveland, invented by Delmonico’s chef Charles Ranhofer in honor of Grover Cleveland? And the next time you’re in a diner order scrambled eggs a la Columbus, a heart-stopping assemblage of eggs, ham, fried blood pudding, and beef brains named in honor of Christopher Columbus, and see how many stares you get.

While plenty of foods were named after real people, so too were drinks. Veuve-Clicquot, a popular brand of Champagne, was named for Barbe-Nicole Ponsardin, the widow ('veuve' in French) of François Clicquot. The Ramos gin fizz, a gin-based cocktail, was named after its inventor, New Orleans bartender Henry C. Ramos. While the origins of the margarita’s name has been disputed, it’s most likely named after actress Rita Hayworth, who got her start dancing in Tijuana nightclubs under her real name, Margarita Cansino. Coincidentally, the Shirley Temple, a combination of Sprite and grenadine, was also named after Hayworth.

So read on to learn about the people whose names live on through foods, even though most people may not realize it. 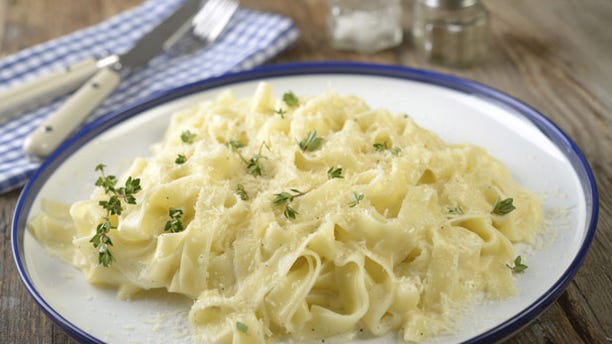 Alfredo’s of Rome was (and still is) an incredibly popular restaurant in Rome. In the early 20th century chef Alfredo de Lelio invented a dish for his pregnant wife, which was basically just fettucine with a whole lot of butter and Parmesan cheese added. Funny enough, the dish that bears his name today bears little resemblance to what de Lelio invented. 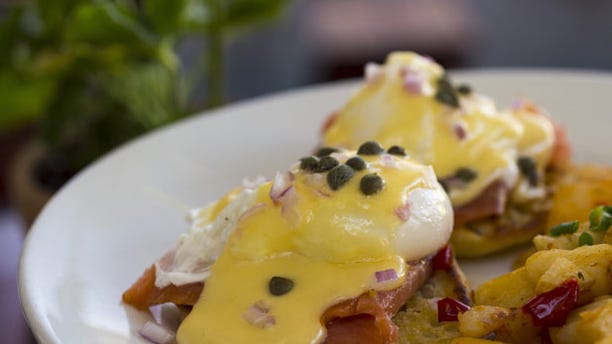 So who exactly was Benedict, anyway? There are two theories: One, a stockbroker named Lemuel Benedict claimed to have thought up the dish while nursing a hangover at New York’s Waldorf-Astoria in 1894. Two, Delmonico’s head chef Charles Ranhofer claimed that he invented it for the stockbroker LeGrand Benedict. Either way, Benedict had an awesome first name. 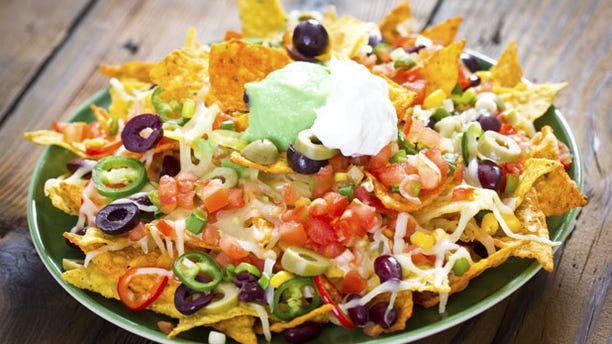 Nachos were invented by a (now-legendary) maître d’ named Ignacio Anaya, who whipped up the first batch for a group of hungry U.S. military wives at a restaurant called the Victory Club in Piedras Negras, Mexico, near Fort Duncan. He fried up some tortilla chips, topped them with some shredded cheddar and sliced jalapenos, and served them as canapés. He named them after his nickname, Nacho, and the rest is history. 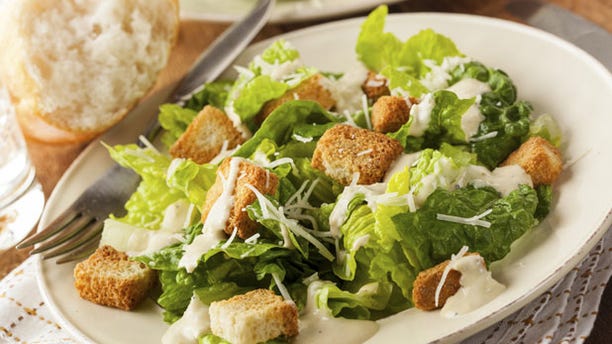 This popular salad actually had nothing to do with Julius Caesar; it was invented by chef Caesar Cardini in the restaurant at his Tijuana hotel, Hotel Caesar. 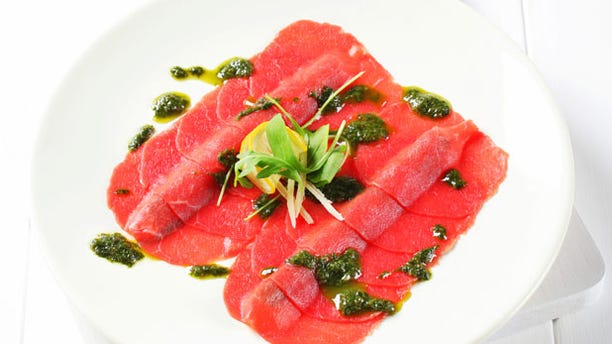 If you think the name of this dish of thinly-sliced raw beef dish sounds like the name of an Italian Renaissance painter, you’re right: Vittore Carpaccio was a Venetian School painter who lived from 1465 – 1525, and the dish was named after the vivid red color the painter was known for. 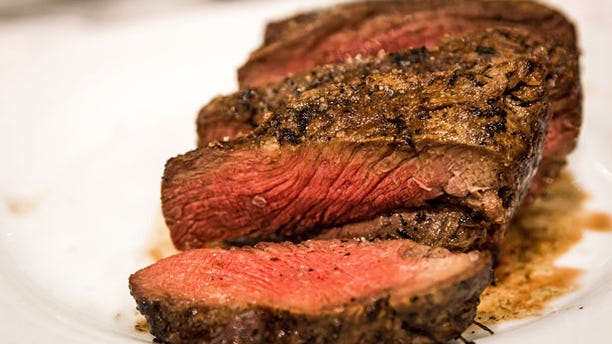 This type of steak was invented by a French chef named Montinireil in the early 1800s, and named for his employer, writer and diplomat Vicomte François René de Chateaubriand. 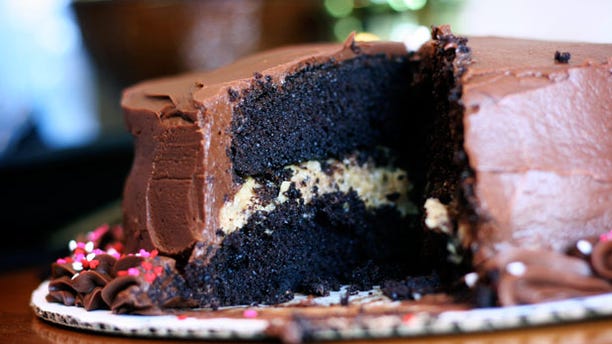 German chocolate cake actually has nothing to do with Germany; it was named in honor of Sam German, whose brand of baking chocolate (Baker’s German’s Sweet Chocolate) is a primary ingredient. 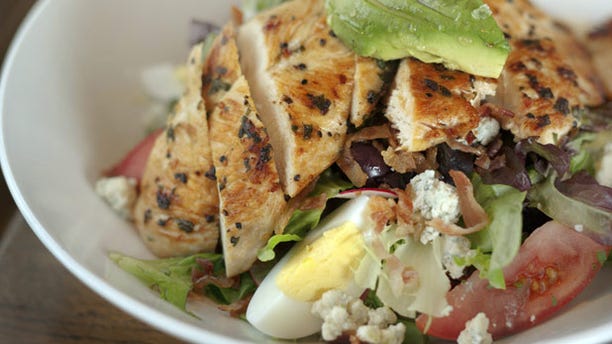 The Brown Derby was a Los Angeles-based restaurant chain, and owner Bob Cobb invented the salad for himself as a late-night snack sometime around 1936. It made its way onto the menu soon after, and is still popular today. 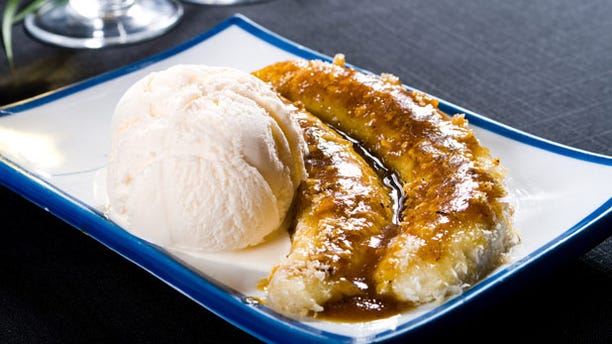 This flaming banana dessert is one of the most popular items on the menu at the New Orleans restaurant where it was invented in 1951, Brennan’s. Owner Owen Brennan named it after his friend, loyal customer Richard Foster.

The Surprising Origins of the 10 Biggest Chain Restaurants

Why is Bacon Called Bacon? And Other Food Name Origins

The 50 Most Important Inventions (and Discoveries) in Food and Drink