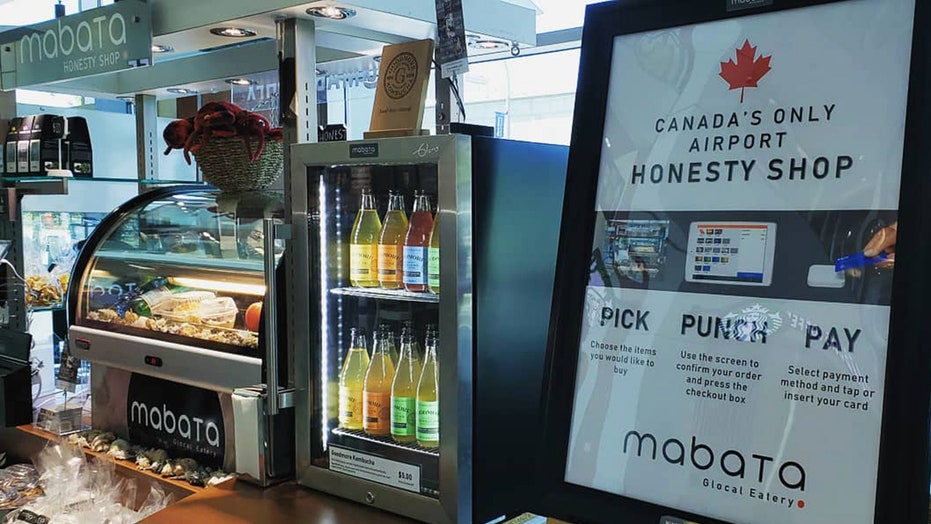 Similar to families leaving out candy without supervision for trick-or-treaters on Halloween, a new kiosk at a Canada airport is relying on the honesty of customers who buy their food.

Two entrepreneurs opened a shop at the Halifax Stanfield International Airport that has no staff running it, just a credit card reader and box for customers to place cash when making a purchase.

Najib Faris and Francesco Stara decided to open Mabata Honesty Shop, which serves sandwiches, snacks, cookies, pastries, kombucha, and other items, after noticing the same honesty system used by nearby farmers when the pair were picking up ingredients for their restaurant, Mabata Glocal Eatery in Halifax, according to CBC.

A new shop in Halifax airport in Nova Scotia, Canada is relying on the honesty system with customers. They don't have any staff on-site, just a credit card reader and mailbox to place your cash. (Mabata Facebook Photo)

TEXAS TEEN SPITS INTO ARIZONA ICED TEA BOTTLE AND PUTS IT BACK ON SHELF, GETS CHARGED WITH FELONY

"We were so surprised with the idea," Faris told CBC. "You know, you grab a sack of potatoes and drop in 10 bucks in the bucket and leave. And we're like, wow, this is amazing."

The airport shop has no staff on location and customers can pay using a tablet with a credit card reader or by placing cash in a black mailbox. A sign at the kiosk fittingly reads, #BEHONEST.

So far the shop has reported no thefts or incidents since it opened on July 10.

"We took a leap of faith and invested our trust in people," said Faris.

The two entrepreneurs are from Nova Scotia, a place they say values honesty above all else. In 2017, an experiment by Atlantic Credit Unions placed 12 wallets with 100 dollars throughout the province. Nine out of 12 were returned with the money still in them.

This experiment along with Faris and Stara's personal experience interacting with people in Nova Scotia gave the pair the confidence to integrate the farm honesty system in the airport setting and they felt Halifax was the best place to test out their theory.

"Nova Scotia has always been known as a place where honesty goes above all and a place where people really still hold onto the true core values of humanity, which is rare these days in the world," Faris told the news outlet.

The pair said customers have left them thank you notes and even a gift card since they opened.

"It's that level of honesty that we're so, so humbled and proud to see in this city," said Faris.

He said they will plan to expand the project to schools, hospitals, and shopping centers, depending on the success of their shop.