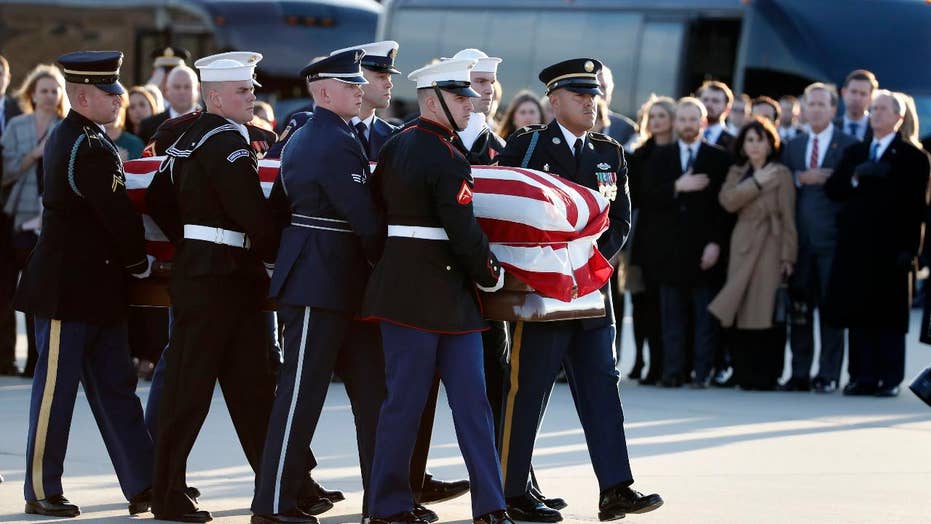 During his undergraduate days working at the bar at the University Club on the Texas A&M campus 20 years ago, Mark Faries says he used to serve Scotch for the late President George H.W. Bush — with special instructions.

"I want to say that his main drink was Dewar's and water," Faries, now a professor and researcher at the Texas A&M Agrilife Extension Service, told KBTX — but serving it sometimes came with a twist, he said.

Bush Sr.'s main drink back then was Dewar's and water, according to Mark Faries, now a professor and researcher. (Mark Faries/Facebook)

"[The president] was always surrounded by a group. If his drink was out, he had this very smooth way of putting his drink behind his back and slowly moving the crowd backwards to where he'd come back up to the bar, and I could refill behind his back,” he remembers.

"Then he'd pull it back and go wherever he wanted to go. And no one would be the wiser,” Faries said of his memories of working events for the former first family at their Bush Library apartment and at the University Club bar.

Faries said that former FLOTUS Barbara Bush, too, went the extra mile to get to know him.

"She came in and introduced herself, which I don't know why she had to, but she did,” he laughingly recalled, as per the outlet. “She was so concerned that I was taken care of - "Was I hungry?"”

If he was, the Texas A&M alum says that Mrs. Bush would make a pimento cheese sandwich, “just like your mother or grandmother” — and the legacy of the family’s generosity has stayed with him forever since.

"I've held that with me, to be honest, over the years," Faries said. "It shows you the capacity of someone to be a real person, down to earth and caring and loving — to get a position of status and not change."

If Faries was hungry, the Texas A&amp;M alum says that Mrs. Bush would make a pimento cheese sandwich, “just like your mother or grandmother” — and the legacy of the family’s generosity has stayed with him forever since. (iStock)

Born in 1924, the 41st president was known for his gentlemanly demeanor, dedication to traditional American values, willingness to take on foreign despots like Iraq's Hussein and Panama's Manuel Noriega, and presiding over the breakup of the Soviet Union.