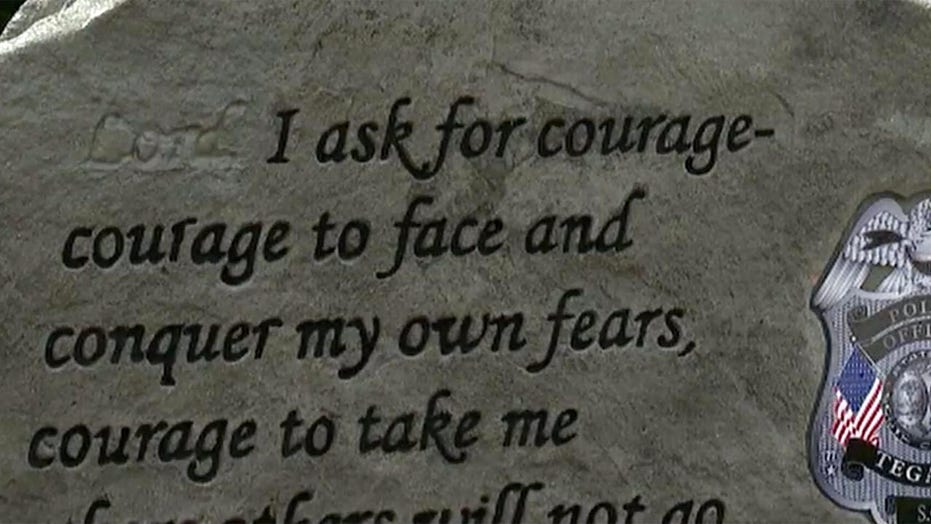 Fox News contributor Jonathan Morris says Republicans have a responsibility to take on Democrats who say the president and conservatives are 'evil.'

The Tega Cay Police Department put up a memorial, donated by a civic group, to honor fallen officers. It was similar to other memorials around the country, including Washington, D.C., but the city's attorney cautioned that because it doesn't have historical significance, it should be censored, FOX 46 reports.

All references to the Lord were removed.

PASTOR DOUBLES DOWN ON 'AMERICA: LOVE OR LEAVE IT' SIGN AS MEMBERS WALK OUT

On the front, the memorial has the Scripture reference Matthew 5:9 from Jesus' famous Sermon on the Mount, which says, "Blessed are the peacemakers, for they will be called children of God."

And on the back of the stone was a prayer: "Lord, I ask for courage. Courage to face and conquer my own fears, courage to take me where others will not go...Give me Lord, concern for others who trust me and compassion for those who need me. And please Lord, through it all, be at my side."

The memorial wasn't vandalism -- as some residents initially thought -- but city officials covered over three references to the "Lord," which can still be faintly seen on the stone but no longer in bold, black lettering.

“There is just as many people upset now that it got removed over people upset it was there in the first place," Tega Cay City Manager Charlie Funderburk told FOX 46. "There is no win here at all."

Fox News contributor Jonathan Morris accused activist groups of forcing Americans to conceal their faith to their homes and churches, as long as it is behind closed doors. He said that is not the law of the land.

"What they are trying to do," Morris told "Fox & Friends" Tuesday morning, "is erase the name and the voice of God in the public square and that is not good for our country."