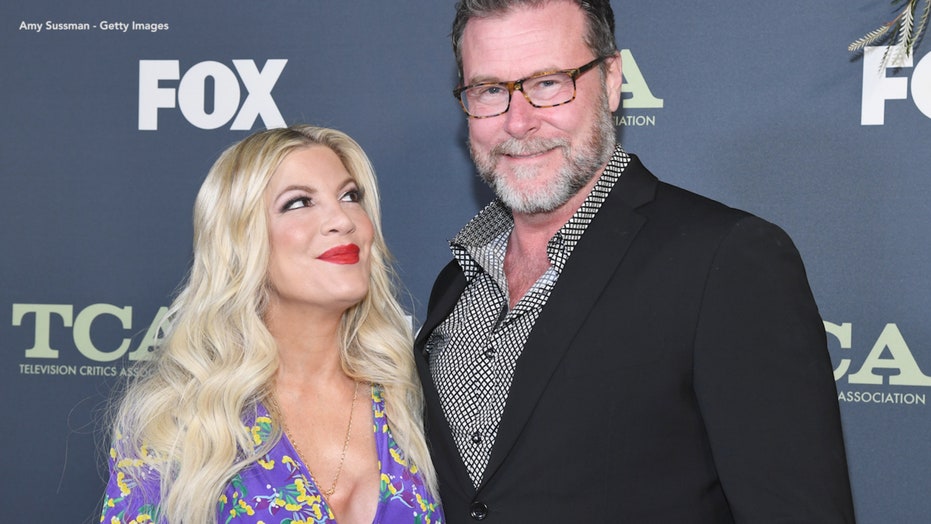 Tori Spelling talks being an ordained minister, quarantining with husband Dean McDermott: ‘It brought us closer’

EXCLUSIVE: Tori Spelling has many roles she’s proud of. But one that fans may not expect is that of an ordained minister.

The former “90210” actress is appearing in the TBS competition series “Celebrity Show-Off,” where five stars from the world of sports, music, comedy, TV and film face-off and see who can provide the most compelling content from the comfort of their own homes. The longer a celebrity stays in the competition, the more money they raise for their charity of choice. In the series, which is hosted by Mayim Bialik, Spelling will virtually officiate a wedding.

The 47-year-old spoke to Fox News about appearing in “Celebrity Show-Off,” being an ordained minister, quarantining with husband Dean McDermott, raising five kids and how she copes with trolls on social media.

Fox News: Where did the idea to appear in “Celebrity Show-Off” come from?
Tori Spelling: It came about during a time when we were on major lockdown and nothing was happening. I thought, "What a great opportunity to be able to do something, play for charity, and entertain people across the world."

I wanted to do it. I also specifically really wanted to celebrate celebrations for people. I knew people were missing weddings, and birthdays, and baby showers, and just everything. I love party planning, so I kind of saw an in there to be able to do something for them virtually.

Fox News: You’re an ordained minister. What made you take on that role?
Spelling: I actually got ordained, gosh, 15 years ago now, I think, for a couple that just wanted me to marry them. So I did it. This couple that I married virtually [on “Celebrity Show-Off”], I think they're my seventh couple that I've married.

TORI SPELLING SAYS HER KIDS HAVE BEEN THROUGH 'SO MUCH BULLYING'

Fox News:  As someone who's been married for 14 years now, what would you say has been the secret behind your lasting marriage? What advice would you give that couple?
Spelling: I know when I meet people that have been married 34 years, I'm just like, "What's the secret?" I think communication. I think we're always evolving and changing, and it's important to keep checking in and make sure that you're evolving together.

Fox News: How did you and Dean McDermott make it work during quarantine, a testing time for many couples?
Spelling: We’ve actually, I think, gotten along better during quarantine because we are with our family. I love being with my kids. That was an easy one being with them 24/7. You have to go to work and go to meetings, you're just going to the next room to do Zoom. It's actually worked in our favor. We have planned a lot more meals and kind of done things outside the box, thinking creatively. It's brought us closer.

Fox News: What would you say has been the biggest challenge you've been facing as a mom of five these days?
Spelling: That would be homeschool. I'm definitely not going to be adding school teacher to my resume. I failed at that. But it was difficult with four. I mean, my baby doesn't do it, but with the other four, having to transition into that world is just very different. I know it's been hard for moms everywhere, but we're getting through it.

Fox News: You've always been very candid with your fans, especially on social media. How important has it been for you to be so open despite dealing with trolls?
Spelling: Oh, I'm used to them. I mean, ever since back in the day in the '90s, there were online trolls. It was just the social media aspect was different. There were still chat rooms and things, and you could still read people writing horrible comments. It's just obviously more in your face nowadays, because it's right there on Instagram, and Facebook, and Twitter.

I don't know. I still do. I feel like the thing that has kept me really engaged with everyone is that I'm authentic. Maybe sometimes an overshare, but it's what I really enjoyed about this experience and this journey and my career is becoming close with my fans and having that connection. A lot of them, they become your community, they become your friends. I love sharing everything. I wouldn't change it.

Fox News: Would you ever consider doing another Lifetime film?
Spelling: Totally. I loved being like the TV movie queen back in the day, and I still watch all those films, too. I'm a fan of Lifetime as well. Yeah, I definitely would love to do some more. I have a lot of ideas.

During that time period, it was pretty much all women in peril movies, but we always prevailed at the end. I mean, I just used to love the titles, to be honest; "Mother, May I Sleep with Danger?," "Co-ed Call Girl." I had some doozies.

Fox News: Do you have any advice on how people can stay connected with loved ones now more than ever?
Spelling: I mean, Zoom has been an amazing tool. Sometimes I just get on Zoom with my girlfriends, and it's moms' night in. You have a cocktail and you're just in the other room. It's been such a great tool. I know sometimes when things weren't on lockdown, it was really difficult for people to connect and see each other because of expenses, flying places to see family. Now we can kind of do it virtually. It's not exactly the same, and it's the new normal, but you can still really make it work and stay connected.

DENNIS QUAID, 66, AND LAURA SAVOIE, 27, SECRETLY ELOPE: ‘IT WAS BEAUTIFUL’