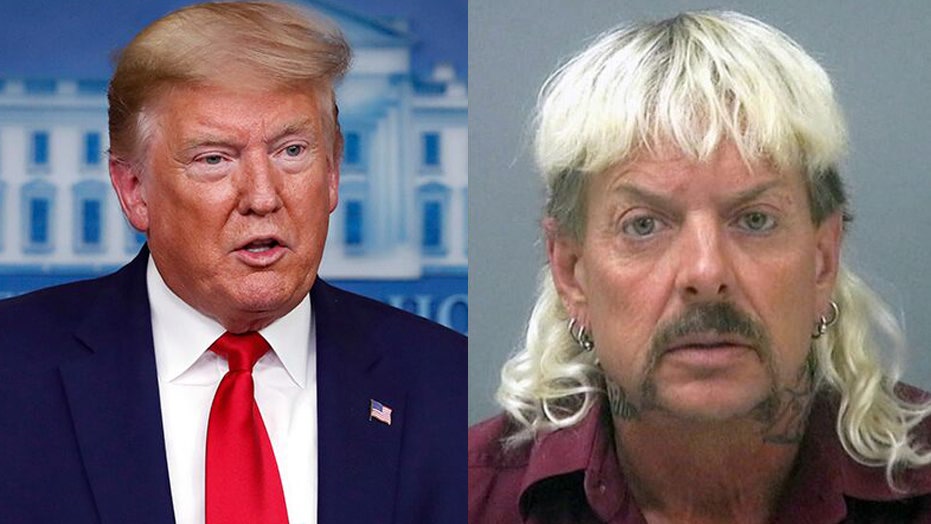 The 57-year-old was jailed in January on animal abuse charges and as a conspirator in a murder-for-hire plot against his nemesis Carole Baskin.

Passage, 23, explained during an appearance on “Good Morning Britain” on Wednesday how the defense for Exotic, whose real name is Joseph Maldonado-Passage, plans to deliver the pardon request to President Trump.

“Joe's legal team are sending out the requests for it next week or the week after," the 23-year-old claimed. "They are driving a car all the way to D.C. to deliver it in person."

"We all know the situation, the people who are actually in Joe's life," Passaged shared. "We know he was confronted with this plot to take out Carole.”

Passage also claimed Exotic was “in a really depressed mental state” and “taken advantage of by someone he thought he could trust” when it came to his legal mishaps.

“There is loads of evidence that proves it, that was not used in the court case, that was thrown out by the judge,” Passage alleged.

He also blamed the situation on competitors who were “trying to keep [Exotic] out of the business.

Passage went on to say that if the pardon is rejected, “the appeals process is really going to show the world exactly the situation that has happened.”

The reality star then revealed new details about Season 2 of “Tiger King.”

“I’ve done a little bit of filming for that [Season 2],” Passage said. “I do not know the release date but it’s going to be very interesting because it will tell a little bit of Joe’s arrest and afterwards.”

He continued: “I know there’s going to be some phone call recordings of Joe that is going to be in it. There is no filming since he’s incarcerated.”

Passage’s latest statements about Exotic seeking a presidential pardon through his lawyers come after several months of the former zookeeper making pleas on social media.

The following month, Trump was asked by a reporter about the potential of pardoning the “Tiger King” star. He admitted to not knowing anything about the case, but said he would “take a look.”

In June, Exotic once again pleaded for a presidential pardon.

In a letter obtained by TMZ, the former zookeeper urged Trump to “keep his word and look into making this wrong a right.”

Exotic also asked for help from Cardi B, who previously tweeted in support of him, as well as Kim Kardashian, who has successfully gotten the president to pardon prisoners whose cases she’s been passionate about.

“Please ladies I’ve done nothing wrong but act a fool to protect my zoo from arson and people hurting my animals. Hear my scream for help,” he concluded the letter.