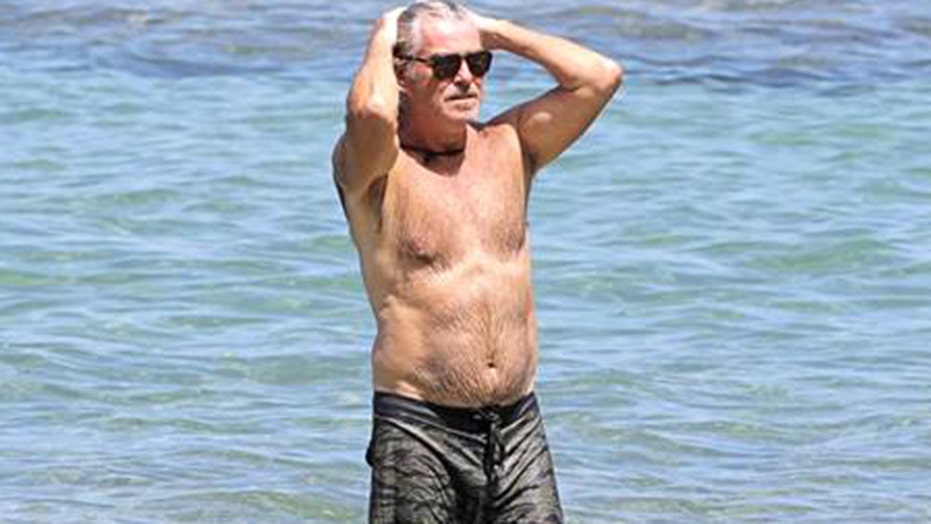 Pierce Brosnan is soaking up some sun.

The 68-year-old James Bond actor was photographed shirtless on Sunday while taking a dip in the waters of Hawaii.

The Irish actor stepped out for a day of fun in the sun donning dark grey swim trunks. In one photo obtained by Fox News, the shirtless Brosnan's tanned body is on full display as he runs his hands through his salt and pepper hair. He also opted to wear black sunglasses for the trip to the beach.

ALL OF THE POLITICAL FASHION STATEMENTS AT MET GALA

Pierce Brosnan went shirtless during a trip to the beach in Hawaii. (MEGA)

Most recently, he stars in the modern-day musical "Cinderella" directed by Kay Cannon. Brosnan, who plays King Rowan, stars opposite Camila Cabello, Idina Menzel, Minnie Driver and Billy Porter. Brosnan recently spoke to Collider about the gig and shared how much fun he had making it alongside stars he admires.

"I’m an actor and I’ve been asked to play many roles, and there’s always a surprise factor. I was flattered because the script was so good and the company of actors, the ensemble, was so rich, from Billy Porter as the fairy godmother and Idina Menzel, who is a powerhouse on Broadway. And then, of course, Minnie Driver plays the queen," Brosnan said of his interest in joining the cast. "She and I are old pals, and that was a delight. So, I felt very comfortable. I felt confident. And it allowed me to go back to London. I love being able to go back to London because I have family there and friends. And Kay just was so effervescent. She brought such a passion to each day’s work."

PIERCE BROSNAN SAYS HE HAS ‘NO REGRETS’ ABOUT BEING REPLACED AS JAMES BOND: ‘IT’S WITH YOU FOREVER’

Brosnan explained how the COVID-19 pandemic affected their filming schedule. The stars started on the musical last February, just weeks before productions began to shut down worldwide.

"We were in Blackpool, doing the ballroom sequence. There’s a magnificent ballroom in Blackpool. And on that Friday they said, ‘That’s it, we’re closing it down.’ I hightailed it back here, to the north shore of Hawaii, and I thought that was it. I thought, ‘Well, that’s over.’ But then, five months later, we went back, and thank God we did. We went back under the restrictions of COVID. You get tested every day, you wear masks, you take the masks off, you do the scene, you sing, and you put the mask back on. It was a challenge."

Plus, Brosnan suggested he was more than comfortable having to wear a crown for the role. He joked that he recently woke up and wondered where it went and if he still has a chance to snag it as a keepsake.

"It was a very beautiful clown. Actually, I woke up the other day and I thought, "What happened to the crown?" I was going to keep the crown. Maybe I could still get the crown from the company, but highly unlikely. There’s such a flamboyance. The costumes give you such a regal posture and elegance, so the work came effortlessly, really," Brosnan added.

Last year, Brosnan reminisced on his lengthy acting career and revealed he has no plans to retire.

"I have no desire to retire," he told The Guardian. "I am a man of 67 years now and the parts that will come to me will be the parts of the elder, the parts of the comedic turn. At this point in life, I don’t know what else to do but act and paint."