Salma Hayek on Hollywood studios: 'They don't want me but I don't really care' 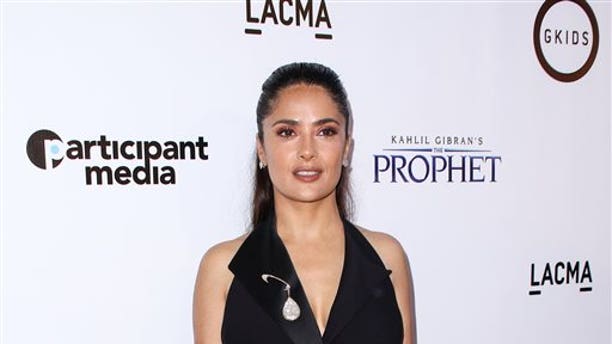 Salma Hayek says that while Hollywood studios may not be calling as much lately, she's staying plenty busy.

"I think they don't want me but I don't really care," said the Oscar-nominated actress. Hayek produced and voices a character in the animated film adaptation of Lebanese writer Kahlil Gibran's 1923 book of prose poetry, "The Prophet." It's a passion project, opening in U.S. theatres on Aug. 7, that she said was partially inspired by her 7-year-old daughter Valentina Pinault.

"It's meaningful. It's hopeful. It's uplifting. It's respectful. It honors children," Hayek said. "Many people tell me, 'But they are not going to like poetry.' Children love poetry. That's why we have the nursery rhymes and then we don't give it to them anymore. It's their first language. They think in metaphor."

Hayek hasn't been as much of a red carpet fixture as she once was in the entertainment world. She said she's been busy with charity events.

"I've been getting awards from different places for the humanitarian work and I've had a lot of movies come out. Then there is my husband (French billionaire Francois-Henri Pinault) also who takes me to many places. There's that stuff too and I've just been busy with life," she said.

Sitting in a long sleeve striped button-up Gucci wrap dress, the "Frida" actress scrunched her face to display lines when asked about turning 49 next month.

"No Botox yet, you can see," she said, adding that her 40s had been a "great adventure."

She added, "And the men today are terrible because when you are coming to the 40s they ... start going away. But you know what? (Not) the good ones."