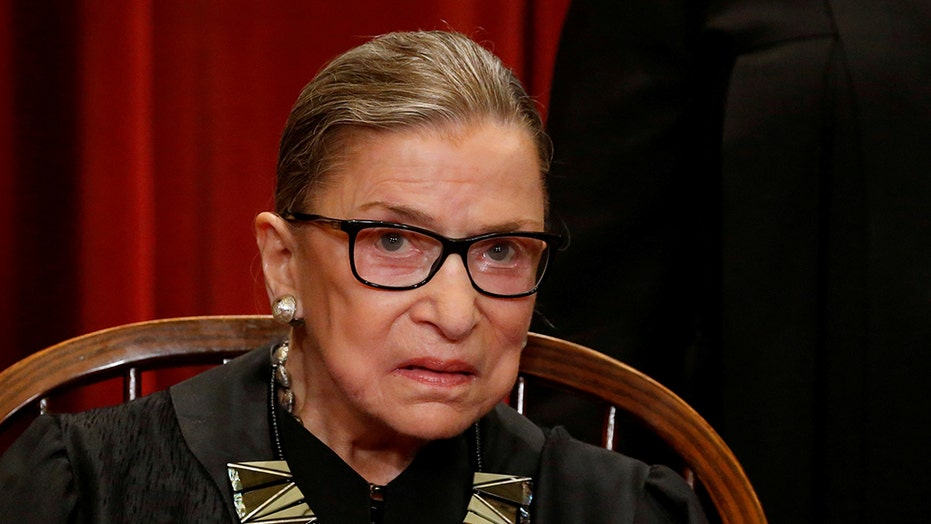 Hollywood stars and beyond are paying tribute to the late Ruth Bader Ginsburg.

Following the tragic news, stars immediately took to social media to honor Ginsburg and to remember her legacy.

Kristen Bell said: "'Forget the bull in the China shop, there's a china doll in the bull pen.' - my fav song from the 2018 documentary RBG Few women who've lived on planet earth have been as committed to helping others as Queen Justice Ruth Bader Ginsburg. I am deeply saddened by this loss, for everyone.

She continued: "Most of all, my little girls. Who know the story of Ruth's tireless work ethic and commitment to the rights of both men and women, to nursing he husband through cancer while working AND getting her law degree, to raising 2 children, from numerous books weve read about her. Rest in Peace Queen, and thank you for everything you did for us on earth. You will always be a true north.Let's all give a hearty Ugly Cry for this epic 👑 tonight."

Justin Theroux -- who starred in the movie, "On the Basis of Sex," about Ginsburg's life -- shared several photos of him meeting Ginsburg, captioning his post: "I am heartbroken. I have no words for the hole that has just been blown through us.Thank you for your service Justice Ginsburg.We’ll miss you RBG.I love you Ruth. 🖤"

Oprah tweeted: "We just bowed in prayer at our house for her Full and filled life and legacy, resting in peace and power."

Cher described Ginsburg as her "hero" and called her "1 of the greatest women in history."

Jamie Lee Curtis tweeted: "Thank you for your leadership and service to us all. We are in your debt and we will continue to fight with all our power. Rest in your great power."

Mariah Carey wrote, "Thank you for a lifetime of service. Thank you for changing history. We will never let it be undone. RIP RBG."

Mandy Moore said, "Thank you, RBG for devoting your life, love and legacy to the rule of law. What a trailblazer in every way. What an immeasurable loss in every way. We will honor you by voting to protect all that you stood for. #rbg #heartbroken."

Kevin Bacon echoed a similar sentiment to Moore, stating: "What a tremendous loss. Thank you, RBG for your life’s work. Rest in power."

"Captain Marvel" star Brie Larson quoted the late justice, writing: “'Women belong in all places where decisions are being made." She then thanked Ginsburg.

"Thank you, Justice Ruth Bader Ginsburg. We’ll keep pushing our way into all the places we’ve yet to be invited," Larson said.

Actress Michelle Monaghan also quoted Ginsburg, tweeting: "Fight for the things you care about, but do it in a way that will lead others to join you - Ruth Bader Ginsburg #rip."

LaToya Morgan, a writer for the "Walking Dead," wrote about how it was her childhood dream to work for Ginsburg. "When I was a kid and thought I wanted to be a lawyer instead of a writer, my dream was to clerk for Ruth Bader Ginsburg. Because she was the gold standard. She was the trailblazer. So many little girls probably had the same dreams because of her. Thank you, Justice Ginsburg."

She added: "God bless you, Ruth Bader Ginsburg. I am not a very religious person but these were the first words that came to mind when I heard this very sad news. A titan. A beacon. A giant. What a loss. And she fought so hard for so long. Bless her."

Mindy Kaling said: "Ruth Bader Ginsburg was the kind of scholar and patriot you get excited about explaining to your kids. The kind of person who you say “who knows, one day you could be HER”. I hope you rest well, RBG, you must have been tired from changing the world."

Like many, Maria Shriver shared that Ginsburg's passing has left her in tears.

"The news of #RuthBaderGinsburg passing has left me in tears," Shriver said. "What a hero she was to me and millions of others. A living legend! I was blessed to know her and her amazing husband. And as a woman, I am the beneficiary of her work."

She added: "Ruth’s work has changed the lives of millions of people. This is a moment to celebrate her amazing life, but also to mourn her passing. She leaves a huge gap in our world and in my heart. #ruthbaderginsburg."

Meghan McCain wrote: "Rest in peace Ruth Bader Ginsburg - a true legend, an iconoclast, a glass ceiling breaker, and a feminist icon. She changed the world in so many incredible ways. Prayers, love and strength to her family during this dark time.

Jennifer Lopez tweeted photos of herself and fiance Alex Rodriguez meeting the Justice. The singer said she was "heartbroken" by her passing.

"She was a true champion of gender equality and was a strong woman for me and all the little girls of the world to look up to," Lopez wrote.

Comedian Sarah Silverman said she was "gutted" by the news and highlighted Ginsburg's sacrifices for all.

"I know she tried to hang on, for all our sakes. She hung in there so hard. #RBG," Silverman tweeted.

In a statement to Fox News, Betsy West and Julie Cohen, directors of the 2018 documentary "RBG," said: "Like so many Americans, we are crushed by the death of Justice Ruth Bader Ginsburg. Even had she not become a Supreme Court Justice, Ginsburg earned a place in history for what she did to win equally for American women. When we asked her several years ago how she wanted she wanted to be remembered, she said with characteristic modesty, 'Just as someone who did whatever she could, with whatever limited talent she had, to move society along in the direction I would like it to be for my children and grandchildren.'"

The Supreme Court Justice was appointed to the Supreme Court in 1993 by President Bill Clinton and spent more than two decades on the bench in the highest court of the land. She is survived by her two children, Jane Carol and James Steven Ginsburg.