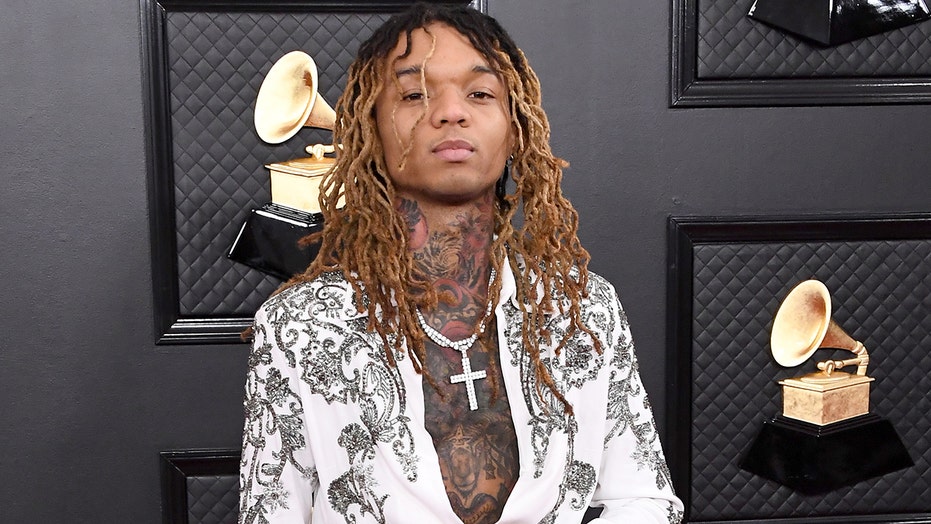 Swae Lee, one half of the dynamic hip-hop duo Rae Sremmurd, can add another stripe to his jacket as the prolific producer and rapper is also now a fashion designer.

Lee, whose real name is Khalif Brown, made waves earlier this month when he debuted his new shoe collaboration with established designer Giuseppe Zanotti at Saks Fifth Avenue in Miami during the weekend of the big game.

In his first foray into the world of design, the effervescent performer and Zanotti teamed up to develop and release a shoe collection that adds a new element to the fast-rising genderless fashion movement.

JENNIFER LOPEZ STUNS IN NEW VERSACE CAMPAIGN: 'I AM SO EXCITED'

For his part, Swae Lee ushered in three different types of footwear that feature suede loafers, canvas boots, and stylish sneakers, all with their own unique and bold cues detailing the floral motifs and gobs of glitter that make the creations stand out in a big way.

“I love the flower sneakers and boots,” Swae Lee told Fox News on Monday when asked about his favorite pieces from his collection. “Flowers mean growth, blossoming. I really care about nature and the earth we live in.”

The 26-year-old said he jumped at the opportunity to work with the Italian designer known for the sculpted silhouettes in his luxury footwear line as well as the bevy of jeweled heels, jewelry, and handbags. Swae Lee marveled at Zanotti’s eye for creating looks that are well-received by many different types of people throughout the world – which falls right in line with Swae Lee’s brand as a musician and writer as he’s lent his pen to a cornucopia of industry heavyweights including Beyoncé.

“It’s like writing lyrics for me,” he said of his stout confidence to don whatever article of clothing he wants. “With my clothes, I write my own concept of fashion and what it means to me.”

Swae Lee said of his newfound mentor, “He is in tune with people. He knows what people want and he creates shoes which many different worlds can wear, not just for one type.”

Swae Lee arrives at the 2019 GQ Men Of The Year event at The West Hollywood Edition on December 05, 2019 in West Hollywood, Calif. (Photo by Morgan Lieberman/FilmMagic)

Zanotti, 62, reciprocated Swae Lee’s sentiment in explaining his desire to work with the five-time Grammy-nominated artist.

“I admire him. He is a young artist who started from nothing and made his own success,” Zanotti gushed about the “Sunflower” rapper. “He is genuine and true to himself and his art, and he is funny, irreverent and full of energy. As an established designer, I love working with younger talents."

Fox News asked Swae Lee if he envisioned himself as the multi-threat he’s become in the recording and fashion industries respectively. To that, the “Unforgettable” crooner immediately pointed to his intense work-ethic and overall love of playing with different elements of fashion that when brought together, mesh into eye-opening combinations.

“Honestly, I could have never imagined my career happening the exact way it did, but I always wanted to strive for greatness,” he explained. “I will say one thing – I told myself that I was going to grind hard, stay focused and keep my art first and whatever path that set me on, I was going to follow it.”

“I always put in the time work on my craft,” he added. “Long nights in the studio and countless hours perfecting my craft since a teenager. My fashion sense is a reflection of my artistry and always wanting to be a trendsetter and I'm blessed it all came together the way it did.”

Zanotti also explained the noticeable shift in overall direction fashion has taken and what he deems will be the new trend over the next three to five years.

“Fashion will become more and more genderless and streetwear and formalwear will be combined,” he predicted before rambling off a few of favorite dressed celebrities today.

“Billie Eilish, Swae Lee, John Legend and Chrissy Teigen,” he said adding that the lively pair of Legend and Teigen are his “favorite couple on the red carpet.”

As Rae Sremmurd, Swae Lee and his brother Aaquil “Slim Jxmmi” Brown, 28, have released three albums to date, two of which have already been certified platinum by the RIAA.

The pair’s third studio album, “SR3MM,” is a triple-disc released in 2018 that also featured their rumored solo projects “Swaecation” and “Jxmtro” and is certified gold.

Additionally, Rae Sremmurd has 13 singles that have achieved platinum certification with another two singles certified gold.