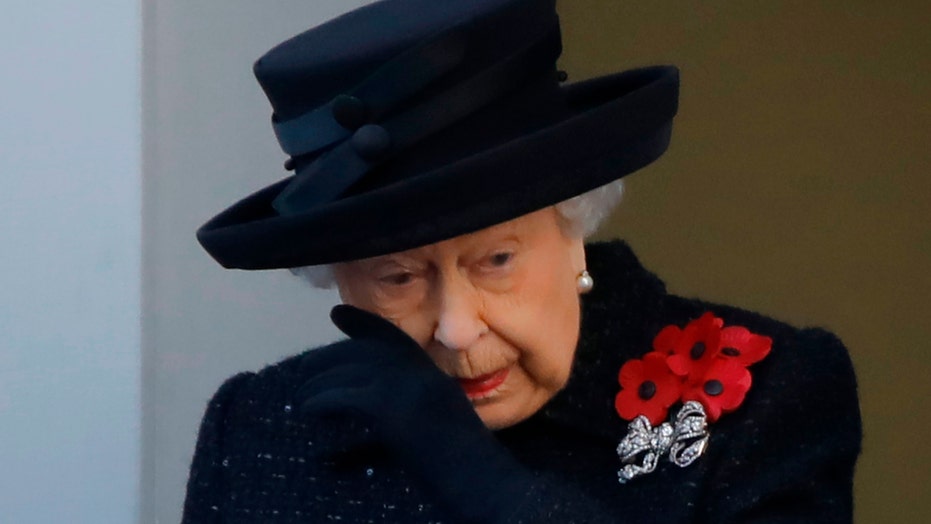 Things have been tough for Queen Elizabeth II.

On Thursday, a royal source told Vanity Fair correspondent and author Katie Nicholl that the 93-year-old is faced with writer’s block while composing her Christmas day speech, attempting to highlight some of her family’s accomplishments from the past year.

According to the outlet, the annual Christmas speech is a royal tradition that dates back to her grandfather King George V. It’s also a task Elizabeth takes very seriously as her opportunity to address the nation.

“It’s still at a first-draft stage because of the election, but it probably hasn’t been the easiest speech to write,” the insider said. “It has been a very different time behind the scenes, and morale is at a bit of a low.”

Britain's Queen Elizabeth II attends the Remembrance Sunday ceremony at the Cenotaph on Whitehall in central London, on November 10, 2019. - Remembrance Sunday is an annual commemoration held on the closest Sunday to Armistice Day, November 11, the anniversary of the end of the First World War and services across Commonwealth countries remember servicemen and women who have fallen in the line of duty since WWI. (Photo by TOLGA AKMEN/AFP via Getty Images)

The queen’s biographer Sally Bedell Smith told U.K.’s Daily Mail that Elizabeth will lean on her son Prince Charles, who is next in line to the throne. Smith said that Elizabeth greatly admires the 71-year-old and the two have been “closer than ever.”

It is likely Elizabeth will address some of the happier moments from the year, including the birth of her eighth great-grandchild, Archie Harrison Mountbatten-Windsor, as well as Princess Beatrice’s engagement.

The British monarchy was shaken by a very turbulent year, mainly caused by Elizabeth’s other son Prince Andrew.

In November, the 59-year-old struggled to defend himself during a disastrous interview with the BBC about his relationship with the late disgraced financier Jeffrey Epstein, who was accused of sex trafficking.

Virginia Roberts previously claimed she was trafficked by Epstein and forced to have sex with Andrew on three occasions nearly 20 years ago. She alleged the first encounter occurred when she was 17 years old.

The Duke of York said he asked his mother if he can “step back” from his public duties.

Royal expert and writer Leslie Carroll, author of “Royal Pains: A Rogues’ Gallery of Brats, Brutes, and Bad Seeds,” told Fox News it’s undoubtedly a difficult time for Elizabeth, who is faced with one of the worst scandals for the royal family in its modern history.

“I feel a bit sad that at this stage in her life… the queen can never relax her hands on the reins of the monarchy and completely trust the younger generation to carry on,” Carroll said. “[She] is said to be ‘disappointed’ by Andrew… He’s always been a wild one, but he went off the rails by associating with Epstein, to begin with."

“The queen will continue to ‘neither complain nor explain’ because she was raised to do so; and with ‘duty first’ as a core belief,” Carroll continued. “[She]… needs to keep the country together as its moral spine, demonstrating the ‘there will always be an England’ sentiment that has kept Britain’s monarchy the longest-running show in history -- still going after over a millennium.”

Roberts, who now goes by Virginia Giuffre, said on Wednesday that she has been informed by the FBI about a “credible death threat” made against her. The claim was made just a day after she posted a cryptic message on Twitter saying she is in no way “suicidal.”

On Tuesday, Roberts wrote that there were “many evil people” who want her quieted after she came forward with her shocking story. She is known as one of Epstein’s most outspoken accusers and has asserted that the Duke of York was one of the men she was forced to have sex with, an accusation that has led to his stepping down from official royal duties.

In this Aug. 27, 2019, photo, Virginia Roberts Giuffre, who says she was trafficked by sex offender Jeffrey Epstein, holds a news conference outside a Manhattan court where sexual assault claimants invited by a judge addressed a hearing following Epstein's jailhouse death in New York. Prince Andrew suffered fresh scrutiny Monday night, Dec. 2, when Giuffre, who told BBC she was a trafficking victim made to have sex with him when she was 17, asked the British public to support her quest for justice. (Photo by AP/Bebeto Matthews)

“I am making it [publicly] known that in no way, shape or form am I [suicidal],” she wrote. “I have made this known to my therapist and GP - If something happens to me - in the sake of my family do not let this go away and help me to protect them. Too many evil people want to see me [quieted].”

Roberts did a BBC interview earlier this month in which she described being trafficked to London in 2001. She told the outlet that Epstein and his girlfriend, Ghislaine Maxwell, took her to a club where she met Prince Andrew.

"It was horrible and this guy was sweating all over me," she said. "His sweat was like it was raining basically everywhere. I was just like grossed out from it, but I knew I had to keep him happy because that’s what Jeffrey and Ghislaine would expect from me.

Prince Andrew, The Duke Of York and Jeffrey Epstein (far right) At Ascot. With them are Edward (far left) and Caroline Stanley (in pink), the Earl and Countess of Derby. ((Photo by Tim Graham Photo Library via Getty Images)

Roberts admitted that her memory was foggy at the time and that she might have some dates and places wrong, but insisted she was certain of the key facts.

Prince Andrew has stepped down from his royal duties. (Photo by Reuters/Neil Hall)

People magazine reported that Buckingham Palace told the BBC that the Duke of York “unequivocally regrets his ill-judged association with Jeffrey Epstein" and “deeply sympathizes with those affected who want some form of closure.”

A lawyer for Maxwell, who has not been charged with any crimes, did not immediately respond to Fox News' request for comment. Epstein died in a New York prison last August.