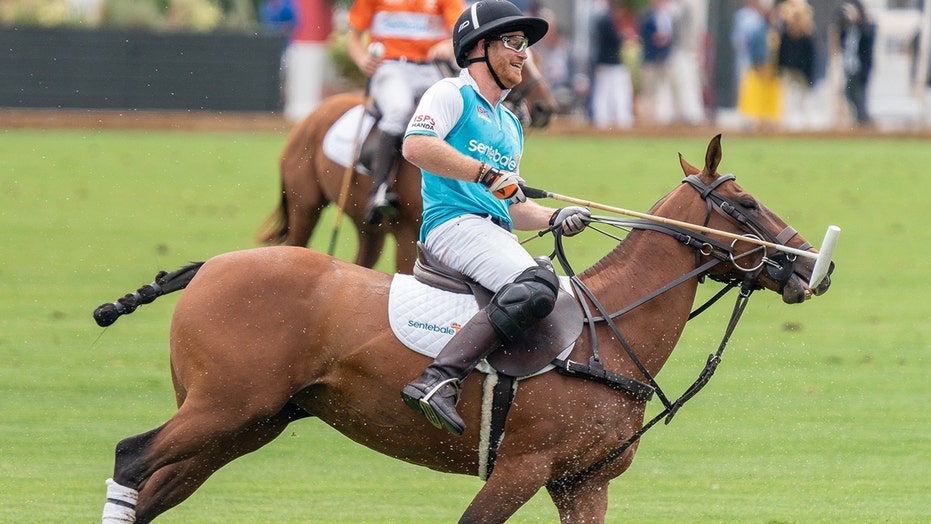 Prince Harry is enjoying life as a father of two.

The 36-year-old royal welcomed his second child, Lilibet, in early June and has now been spotted out and about for the first time since then.

Harry popped up at a polo match in Aspen, Colo., on Thursday to help raise funds for his charity, Sentebale.

For the game, the Duke of Sussex wore a white and turquoise jersey top with white jodhpurs.

PRINCE HARRY CONFIRMS $1.5 MILLION FROM MEMOIR PROCEEDS WILL BE DONATED TO CHARITY

At the match, he announced that he'd be donating $1.5 million of the proceeds of his upcoming memoir to Sentebale.

"This is one of several donations I plan to make to charitable organizations and I'm grateful to be able to give back in this way for the children and communities who gravely need it," he said in a statement, according to royal correspondent Omid Scobie.

Prince Harry rode horseback at The Aspen Valley Polo Club, in Aspen, Colorado as part of a game in aid of his charity Sentebale. (Backgrid)

Harry and Prince Seeiso Bereng Seeiso of Lesotho started Sentebale in 2006 to help "children and young people affected by HIV in Lesotho and Botswana."

"Sentebale is grateful for his personal contribution, which will allow the organization to continue operating at full scale and continue providing critical services to at-risk youth in Southern Africa," the charity said in a statement per People magazine.

A rep for Harry confirmed to Fox News that his memoir with Penguin Random House will be published in late 2022.

"I’m writing this not as the prince I was born but as the man I have become. I’ve worn many hats over the years, both literally and figuratively, and my hope is that in telling my story — the highs and lows, the mistakes, the lessons learned — I can help show that no matter where we come from, we have more in common than we think," he said in a press release. "I’m deeply grateful for the opportunity to share what I’ve learned over the course of my life so far and excited for people to read a firsthand account of my life that’s accurate and wholly truthful."

The memoir will cover the British royal family member's life in the public eye beginning from his childhood to the present day.

He will also delve into his military duty in Afghanistan, becoming husband and father, and tell-all about his various "experiences, adventures, losses, and life lessons that have helped shape him."