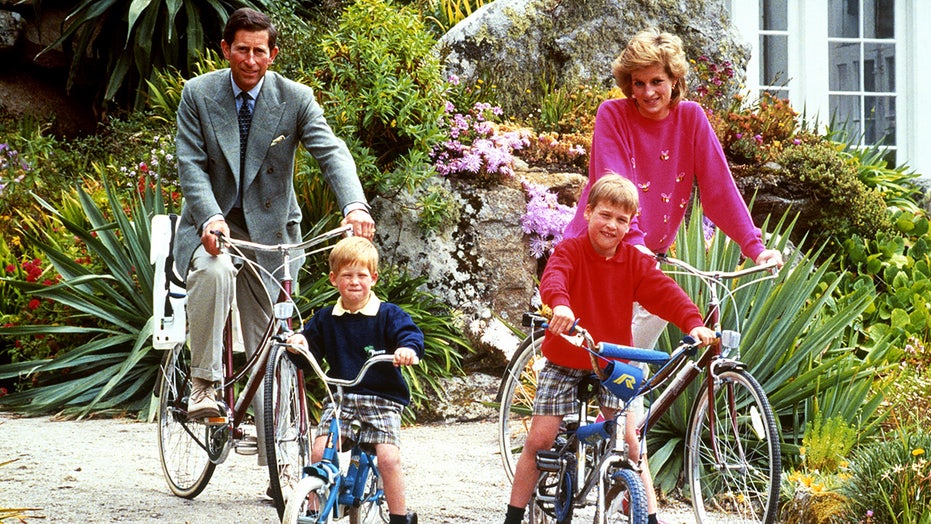 Photos from Prince Harry's childhood debunk one of the claims the duke made in his and Meghan Markle's wide-ranging March interview with Oprah Winfrey.

In Winfrey's two-hour televised sit-down with the Sussexes that aired on March 7, Harry claimed the media scrutiny he was under as a young member of the British royal family meant he couldn't participate in ordinary activities as other kids could growing up. He specifically claimed riding bicycles on the beach with his own son Archie in California is something he could "never" do when he was young.

However, multiple images from the young prince's childhood show him enjoying the outdoor activity alongside his brother Prince William, father Prince Charles and late mother Diana.

"The highlight for me is sticking [my son, Archie] on the back of a bicycle in his little baby seat and taking him on bike rides, which is something I was never able to do when I was young," the prince claimed to Winfrey as quoted by Page Six. "I can seat him on the back, and he’s got his arms out, and he’s like, ‘Whoa.’"

PRINCE WILLIAM CONFUSED AS TO WHY BROTHER HARRY KEEPS ‘THROWING HIS FAMILY UNDER THE BUS’: REPORT

The Prince and Princess of Wales with sons Prince William, right, and Prince Harry prepare for a cycling trip in Tresco during their holiday in the Scilly Isles.   (Photo by PA Images via Getty Images)

Harry, who is now 36, can be seen in photos from the late '80s and early '90s enjoying cycling with his family. One photo shows the duke as a tot riding a blue bicycle with his brother William and his parents in the back during a getaway in Scilly, U.K.

Other photos show the young princes on a cycling outing with their father at the family's Sandringham Estate in Norfolk. Harry can be seen riding in a seat directly behind his father.

Harry and Markle's interview with Winfrey caused quite the stir back in March and is still picking up steam. In the infamous March 7 interview, Markle, 39, and the Duke of Sussex discussed their decision to further separate themselves from the firm after Markle was harassed by U.K. press and allegedly faced racism. The Duke and Duchess of Sussex told the media mogul that a member of the royal family had concerns about the color of their son Archie’s skin before he was born.

The family member was not Queen Elizabeth II or Prince Philip, according to Harry, sparking a flurry of speculation about who it could be. Shortly after the interview, William defended the monarchy by saying that they are "very much not a racist family." The 38-year-old’s comments were made during a visit to an East London School.

The interview also saw Harry reveal that his relationships with his father Prince Charles and his older brother Prince William have ruptured. Markle, who is biracial, also described feeling so isolated and miserable inside the royal family that she had suicidal thoughts. The former television star also said she sought mental health help through the palace’s human resources department but was told there was nothing it could do.

Harry also told Winfrey the royal family cut him off financially at the start of 2020 after announcing plans to step back from his roles. But he was able to afford security for his family because of the money his late mother Princess Diana left behind.

Most recently, in his new AppleTV+ series "The Me You Can't See," the Duke of Sussex discussed how living under intense media scrutiny in his childhood and adolescence resulted in him suffering from anxiety and panic attacks. Harry also said he was "met with total silence" and "total neglect" from his family after they learned of his and Markle's decision to step back as senior working members of the royal family.

"We get followed, photographed, chased, harassed," he continued. "Picking up cameras and flashes of cameras, makes my blood boil, and makes me angry takes me back to what happened to my mum, I experienced when I was a kid. But it went through a whole new depth, not just with traditional media, but also social media platforms as well. I felt completely helpless. I thought my family would help, but every single ask, request, warning, whatever it is, just got met with total silence or total neglect."

Harry maintained that he felt a sense of guilt and grew "angry with [himself]" that he and Markle were "stuck in this situation," adding that the constant badgering played a role in their leaving the U.K. for Canada and later Los Angeles.

"I was ashamed to go to my family because — to be honest with you, like a lot of other people my age could probably relate to — I know that I’m not going to get from my family what I need," Harry, who shares 2-year-old son Archie with the former "Suits" actress, revealed.

In his new series, Harry also advocates heavily for therapy, which he said aided him immensely following the death of his mother in 1997, when he was only 12 years old.

"I wasn’t in an environment where it was encouraged to talk about it either. That was sort of, like, squashed," he said. "[I needed] to heal from the past. … I was so angry with what happened her and the fact that there was no justice at all. Nothing came from that," Harry lamented.

Harry went on to say that through the ages of 28 to around 32, he ultimately turned to drinking and drugs to help him cope with "panic attacks" and "severe anxiety" brought on by his adult life in the firm and the constant reminders of what happened to Diana.

Harry and Markle now reside in California with their son. The couple is also expecting a daughter sometime this summer.

Reps for Harry and Buckingham Palace did not immediately return Fox News' request for comment.