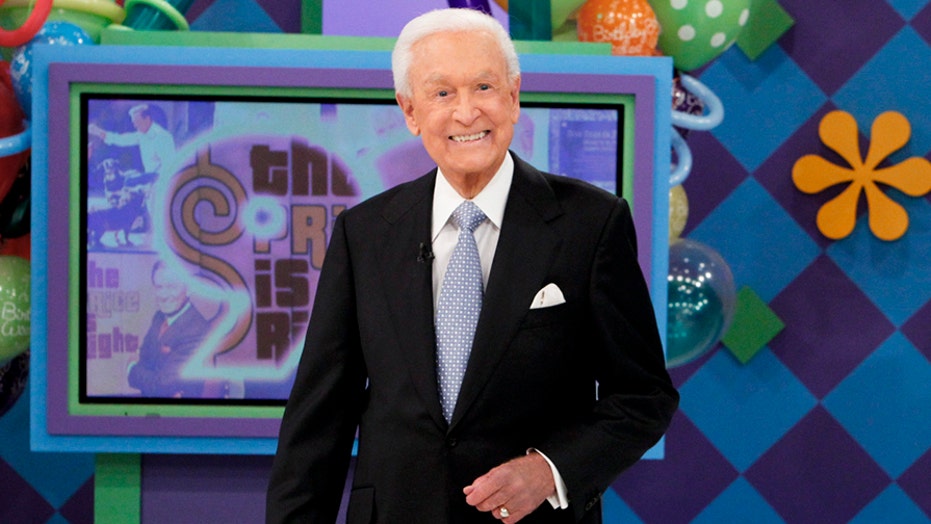 Bob Barker is grateful for all the success he’s enjoyed in Hollywood.

The longtime host of “The Price is Right” retired in 2007, but still tunes in occasionally to see how the beloved game show is doing today.

“He likes Drew Carey and enjoyed the show,” a pal told Closer Weekly for its latest issue currently on newsstands.

According to the outlet, the 96-year-old rarely ventures far from his Hollywood Hills home where he has a full-time caretaker. Over the years, the star has suffered from two strokes and several bad falls.

Bob Barker (right), pictured here with Drew Carey, hosted 'The Price is Right' from 1988 until 2007. (Photo by Sonja Flemming/CBS via Getty Images)

He does visit the grave of his late wife, Dorothy Jo Gideon. The outlet noted the couple first met at an Ella Fitzgerald concert when they were both 15 and eloped in 1945. The marriage lasted until her death in 1981 at age 57 from lung cancer.

Barker’s friend insisted he has “no regrets” and is proud of his time on television.

“We didn’t solve the world’s problems,” the 19-time Emmy winner once said, as quoted by the outlet. “But we hopefully helped you to forget your problems for just a while.”

In addition to his TV success, Barker created the DJ&T Foundation, which was named after Gideon and his mother. The organization aims to provide low-cost spay and neutering services, as well as to fight animal mistreatment.

“Bob is a trailblazer in his devotion to the well-being of animals,” said the pal, adding that he plans on leaving much of his fortune to these efforts.

One source also told the outlet that Barker’s sunset years mean not just looking back, but facing the future.

“He’s not afraid,” the insider alleged. “I think he can’t wait for the day that he and Dorothy Jo are reunited.”

In 2018, it was revealed that Barker donated $1 million to Drury University to support his alma mater’s animal studies program.

The gift brought the total amount Barker has donated to the Springfield school to $3.1 million over the past decade. He also donated money in 2008 and 2009 to support the interdisciplinary animal studies program.

Barker graduated from Drury in 1947 after temporarily leaving school to train as a Navy fighter pilot toward the end of World War II. He worked at Springfield radio station KTTS before moving to California. He hosted “Truth or Consequences” and later “The Price is Right.”