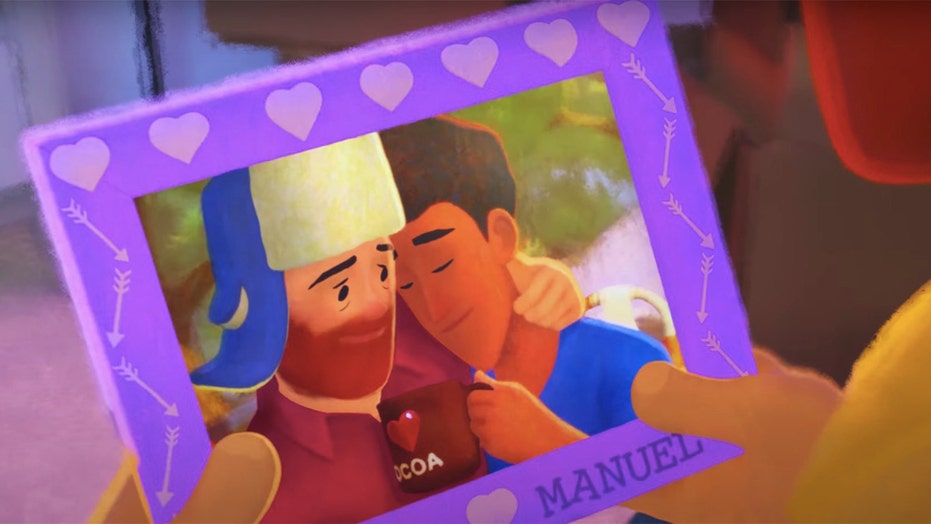 Pixar has unveiled its first gay main character in its new short film "Out" released on Friday.

The computer animation studio, owned by Disney, premiered the film on the Disney+ streaming service through its SparkShorts series. It follows the story of a man named Greg who struggles with coming out to his parents before moving in with his boyfriend, Manuel.

In the clip, Greg is in his bedroom practicing how he'll come out to his parents when they show up at his doorstep. His trusty dog, Jim, is then seen rushing around the house to help hide evidence of Greg's relationship.

"Out" was directed by Steven Clay Hunter, who also worked on "Wall-e" and "Toy Story 2" among other Pixar films. Max Sachar, known for his work on "Coco" and "Incredibles 2," serves as the film's producer.

Pixar hadn't released a film with an openly gay character until its release of this year's "Onward" which features a purple cyclops character voiced by Lena Waithe who references a girlfriend.

Disney has been criticized in the past for its lack of LGBTQ characters in its programs. The network broke ground back in 2017 with its series "Andi Mack," a teen-based show that was the first to depict a character coming to terms with the fact that they are gay.

Disney has also featured a few other LGBTQ characters in their live-action films. "Star Wars: The Rise of Skywalker" featured a same-sex kiss between two soldiers while "Beauty and the Beast" portrayed LeFou as gay.

The studio was praised for its inclusion of a gay protagonist by Twitter users this week.

"I love coming out stories that are done well, and I have high hopes that 'Out' has done just that!" one person tweeted.

"Gay rights, love to see it," wrote another.

"Out" can be streamed on Disney+ now.