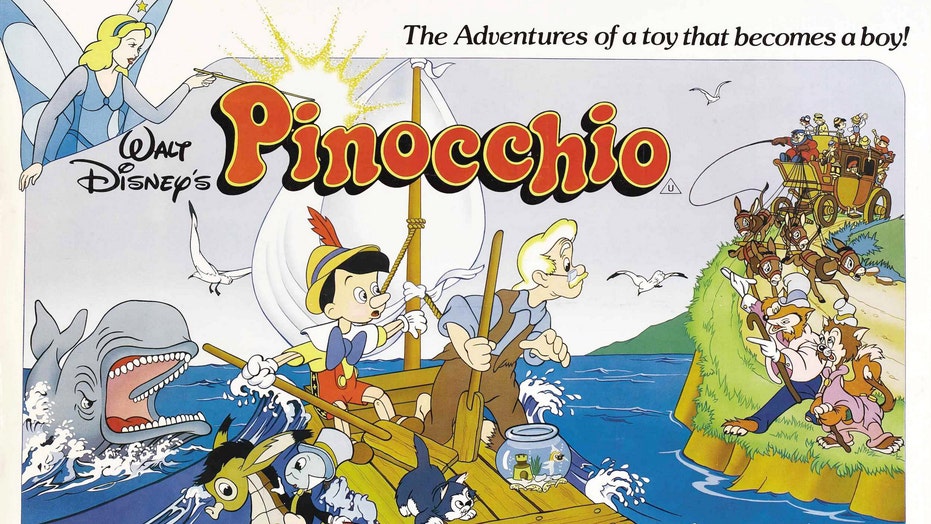 For 80 years, "Pinocchio" has been an iconic Disney film from the company's early days dabbling in animated films.

Fans remember the film fondly and critics praised it in its day. The film currently has a 100 percent on Rotten Tomatoes and won two Oscars: one for the song "When You Wish Upon a Star" and another for the score.

Eighty years after the movie's release, here's a look back at the iconic story of the wooden puppet come to life:

The film begins as Jiminy Cricket introduces viewers to Geppetto, a woodworker. Geppetto crafted a puppet in his shop and as the night draws to a close, Gepetto wishes on a star that the puppet, named Pinocchio, will become real.

The Blue Fairy. (Photo by LMPC via Getty Images)

Later, The Blue Fairy pays a visit to the shop and brings Pinocchio to life. He's still made of wood, but the fairy tells the puppet that if he can prove himself worthy, he'll become a real boy.

Pinocchio is trapped in Stromboli's cage. (Photo by LMPC via Getty Images)

The next day, Geppetto sends Pinocchio to school, but while on his way, Pinocchio becomes distracted and is tricked into joining Stromboli's puppet show.

Stromboli locks Pinocchio in a cage, and the puppet is unable to escape, even with the help of Jiminy Cricket. The Blue Fairy arrives and asks the puppet why he wasn't at school. Pinocchio spouts a few lies, and his nose begins to grow.

Pinocchio promises to be good, and The Blue Fairy restores his nose and releases him from the cage.

Jiminy Cricket and Pinocchio. (Photo by LMPC via Getty Images)

While on his way home, Pinocchio is again tricked, this time into visiting Pleasure Island -- an amusement park for poorly behaved boys.

JOHN TRAVOLTA ON REUNITING WITH OLIVIA NEWTON-JOHN: 'WE LOVE EACH OTHER'

When united with other little boys, Pinocchio and his new pals engage in all kinds of troublesome behavior, and Jiminy Cricket decides to leave.

The cricket, however, discovers that the boys on the island are doomed to be turned into donkeys used for labor or for entertainment at a circus. Jiminy Cricket is able to help Pinocchio escape just before he's fully turned -- he does sprout a tail and long ears, however.

Pinocchio and Gepetto attempt to escape Monstro. (Photo by LMPC via Getty Images)

Upon returning home, Pinocchio learns that Geppetto has set out to rescue him from Pleasure Island but was swallowed by a giant whale named Monstro.

Pinocchio jumps into the ocean and is soon swallowed by the whale himself. The puppet and Gepetto are reunited in the whale's belly, surrounded by various other items Monstro has swallowed.

Pinocchio set fire to some of the junk surrounding them, causing smoke to build and the whale to sneeze him and Gepetto out its mouth. While being chased by the angry whale, Pinocchio pulls Gepetto to safety but is seemingly killed in the process.

"Pinocchio" was released in February of 1940. (Photo by LMPC via Getty Images)

Once back home, Gepetto mourns the loss of his wooden son. The Blue Fairy, however, has decided that Pinocchio proved himself to be brave, truthful and selfless. She resurrects the puppet, restores his ears, removes his tail and turns him into a real boy.