Matt Damon’s comments on sexual harassment in Hollywood has prompted a petition for his cameo to be removed from the mostly female cast of “Ocean’s 8.”

A recent tally of the online petition has over 18,000 signatures calling for his removal.

The reboot, starring Sandra Bullock, Cate Blanchett, Anne Hathaway and other notable female actresses, was “supposed to be an empowering film for women,” the petition says, while alleging that Damon “not only ignored but enabled his friend Harvey Weinstein’s inappropriate behavior.”

"Damon’s inclusion (in the movie) would trivialize the serious nature of the charges against sexual abusers like Weinstein — a show of massive disrespect for the brave women speaking out,"

It cited that Damon allegedly tried to squash a New York Times report in 2004 that detailed instances where the now fallen Hollywood mogul exploited his status as a studio executive to harass and assault women, the Agence France-Presse reported.

Damon denied trying to kill the story and claimed he did not know of the allegations against Weinstein, who helped catapult his career, the report said.

The actor also came under fire last week, for telling ABC News that there was a "spectrum of behavior" and a "difference between, you know, patting someone on the butt and rape or child molestation, right?"

"Damon’s inclusion (in the movie) would trivialize the serious nature of the charges against sexual abusers like Weinstein — a show of massive disrespect for the brave women speaking out," the petition read. 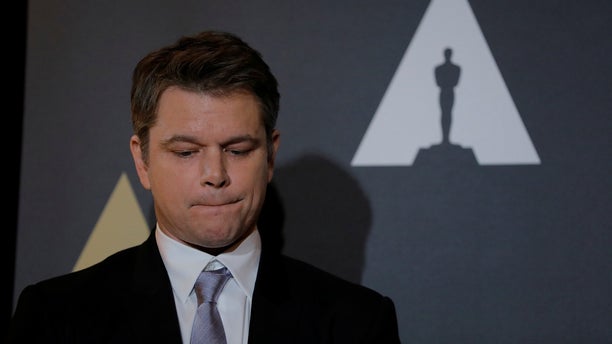 Actor Matt Damon speaks at the reception before the 89th Academy Awards in Hollywood, Calif. He is now facing a petition to remove his cameo in "Ocean's 8." (Reuters)

The petition calls on "Ocean’s 8" producers George Clooney and Steven Soderbergh to leave Damon’s cameo “on the cutting room floor."

Damon's long-time friend, Ben Affleck, who he shared an Oscar with for best screenplay in 1997 for "Good Will Hunting" and Affleck's actor brother Casey, have also been accused publicly in recent months of sexual misconduct, the AFP reported.