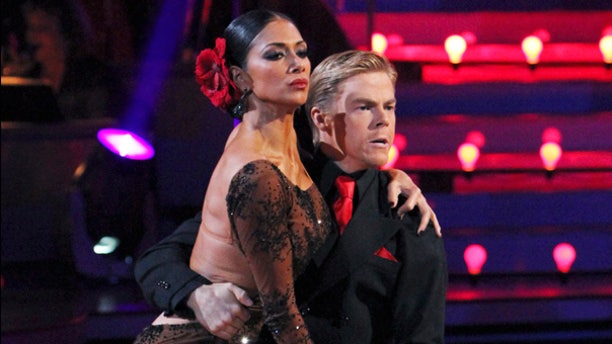 Nicole Scherzinger and her partner Derek Hough perform on "Dancing With the Stars" (© 2010 American Broadcasting Companies, Inc. All rights reserved.)

LOS ANGELES -- The Pussycat Doll is now the "Dancing With the Stars" champ.

Scherzinger performed a high-energy jive as her final dance that earned a perfect score of 30 and inspired head judge Len Goodman to say, "There can only be one winner of 'Dancing With the Stars.' It should be you."

"It's been such a blast," the champion figure skater said. "We are totally satisfied with everything we gave. We're so proud of Nicole and Derek. They deserve it. ... They inspired all the other couples in the competition."

Scherzinger and Hough kissed the mirrorball trophy as they were hoisted on the shoulders of other dancers.

ESPN sportscaster Erin Andrews, the third finalist, and her professional partner Maksim Chmerkovskiy were eliminated from the dance-off halfway through the two-hour season closer, leaving Lysacek and partner Anna Trebunskaya, and Scherzinger to face each other.

Earlier in the evening, all three pairs each danced an Argentine tango and earned glowing remarks from the judges.

Though being on the show "has meant everything" to Andrews, she said she knew the fight for the title would be between Lysacek and Scherzinger.

"I came here under really crummy circumstances," Andrews said. "I just wanted to be myself again." Andrews was the victim of a stalker, who was sentenced to 2 1/2 years in prison for following the reporter to at least three cities and shooting videos of her through hotel peepholes.

Gesturing toward Chmerkovskiy, she said, "This one has just put my life back together, so I'm so thankful."

Chmerkovskiy called the season "a rollercoaster" and "an amazing journey."

"I feel like we've won," he said, "and I certainly have my own prize."

Astronaut Buzz Aldrin danced in a bedazzled space suit that host Tom Bergeron joked was from "the NASA Liberace collection."

The show's first college dance competition came to a close Tuesday, with the team from Utah Valley University taking home their own mirrorball trophy.