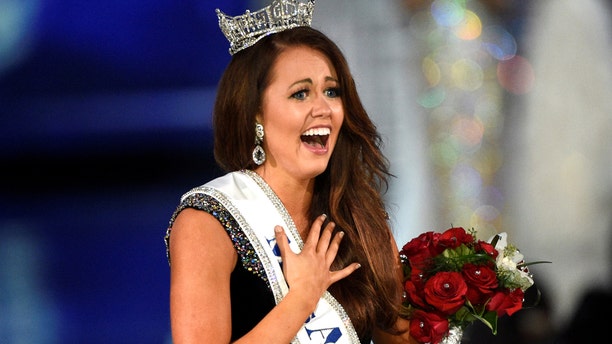 During one of the onstage interviews, Mund said Trump was wrong to pull the U.S. out of the Paris Climate Accord aimed at combating climate change.

“I do believe it's a bad decision,' she said. “Once we reject that, we take ourselves out of the negotiation table and that's something that we really need to keep in mind.”

“There is evidence that climate change is existing. So whether you believe it or not, we need to be at that table, and I think it's just a bad decision on behalf of the United States,” she added.

In an interview before the preliminary event, Mund said she hopes to become the first elected woman governor of her state.

“It's important to have a woman's perspective,” she said, stressing the importance of women in important government jobs. “In health care and on reproductive rights, it's predominantly men making those decisions.”

Mund, however, was not the only candidate to receive political questions.

Miss Missouri Jennifer Davis was asked to be “the jury” on whether Trump colluded with the Russian government to win the 2016 election against Hillary Clinton and give “innocent or guilty” verdict.

“Right now I'd have to say innocent because not enough information has been revealed,” Davis said, adding however that “we should investigate it to its fullest extent.”

Miss New Jersey Kaitlyn Schoeffel, meanwhile, was asked to give her opinion on Confederate statues and whether they should be removed from public display – to which the contestant suggested to move the statues to museums.

The contest’s hosts also asked Miss Texas Morgana Wood what she thought about Trump’s comments after the deadly white supremacist rally in Charlottesville where he blamed the violence on “both sides.”

Wood branded the death of counter protester Heather Heyer as a “terrorist attack” and said the President “should have made a statement earlier addressing the fact and making sure all Americans feel safe in this country.”

The first runner up of the competition was Miss Missouri, while Miss New Jersey was the second runner up.