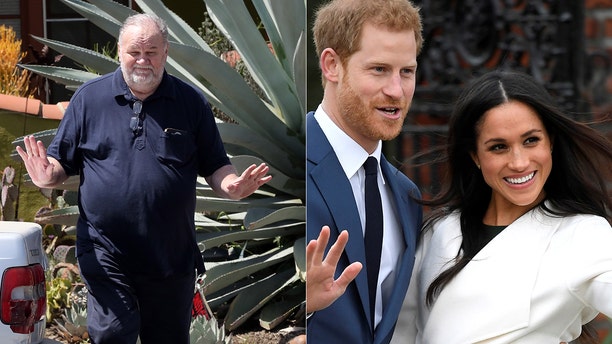 Meghan Markle's half-sister Samantha Grant has lashed out at her royal sibling for her "cold" behavior toward their father Thomas Markle (left) and said that it is on her if he dies. (Mega/Reuters)

Thomas Markle had heart surgery on Wednesday following days of press surrounding his health and speculation on whether or not he’d attend the royal wedding.

According to TMZ, Thomas Markle successfully came out of his surgery, which was scheduled for 7:30 a.m. Wednesday, seeming both alert and coherent. He reportedly suffered a heart attack last week and checked himself back into the hospital on Tuesday after experiencing chest pains.

“I’m OK. It will take a long time to heal. Staying in the hospital a few more days,” he told TMZ. “Not allowed to get excited.”

The actress' dad began making headlines earlier in the week when it was revealed he staged paparazzi photos that showed him preparing for the wedding. The patriarch received a lot of criticism when it was reported he was paid for the posed photo-op. His daughter, Meghan Markle’s half-sister Samantha Grant, claimed she set up the paparazzi shoot – not Thomas Markle.

As curiosity grew about whether or not Thomas Markle would be present to walk his daughter down the aisle to marry Prince Harry, the royal couple asked for privacy.

"This is a deeply personal moment for Ms. Markle in the days before her wedding," read a statement from the palace on Monday. "She and Prince Harry ask again for understanding and respect to be extended to Mr. Markle in this difficult situation."

Markle and Prince Harry are set to be married on Saturday at St. George's Chapel. It's unclear who will be walking Markle down the aisle.

Markle's mother, Doria Ragland, who is divorced from the star's father, will be attending.

If Markle's mother does not walk her down the aisle ‒ a move the palace was rumored to be against ‒ it's possible Prince William or Prince Charles, who has no official duty at the wedding at this time, could step in.

Having one of Markle's own siblings walk her down the aisle is not an option. Her half-siblings, Grant and Thomas Markle Jr., have not been invited to the festivities. Grant has caused some trouble for her famous sister with a tell-all book and various media interviews slamming the "Suits" star. Her half-brother has also criticized the royal couple, but wrote an open letter to the 36-year-old earlier this week making a last ditch effort to get invited.