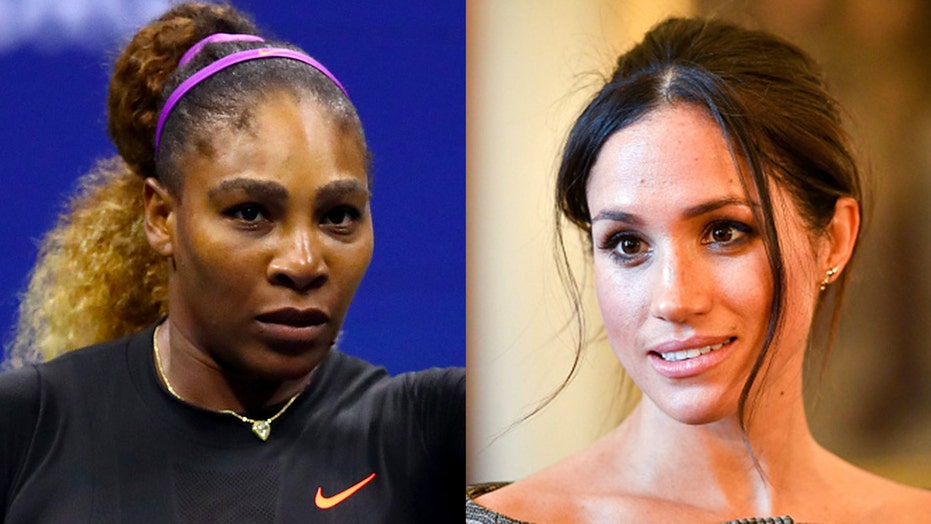 Serena Williams is proud of her pal Meghan Markle.

In the debut episode of Stuart Weitzman’s "Shine Series," the tennis icon reflected on why she publicly supported the Duchess of Sussex after her bombshell interview with Oprah Winfrey.

"And I know it’s not easy, and you can see from the interview that it wasn’t easy," Williams continued. "But she had so much poise and she still had so much class."

During the televised sit-down, Markle described feeling so isolated and miserable inside the royal family that she had suicidal thoughts. The former television star also said she sought mental health help through the palace’s human resources department but was told there was nothing it could do.

Markle, who is biracial, also alleged that a member of the royal family had "concerns" about the color of her unborn child’s skin.

The family member was not Queen Elizabeth II, 94, or Prince Philip, 99, according to Harry, sparking a flurry of speculation about who it could be.

MEGHAN MARKLE AND PRINCE HARRY TO BE SUBJECTS OF NEW LIFETIME MOVIE, 'ESCAPING THE PALACE'

After the interview aired, Williams quickly took to Instagram and defended the former "Suits" star.

"Meghan Markle, my selfless friend, lives her life - and leads by example - with empathy and compassion," Williams wrote. "She teaches me every day what it means to be truly noble. Her words illustrate the pain and cruelty she's experienced.

Williams said she knows "first hand the sexism and racism institutions and the media use to vilify women and people of color to minimize us, to break us down and demonize us."

"We must recognize our obligation to decry malicious, unfounded gossip and tabloid journalism," she shared. "The mental health consequences of systematic oppression and victimization are devastation, isolating and all too often lethal."

This image provided by Harpo Productions shows Prince Harry, from left, and Meghan, The Duchess of Sussex, in conversation with Oprah Winfrey. (AP, File)

"I want Meghan’s daughter, my daughter and your daughter to live in a society that is driven by respect," wrote Williams.

After Harry and Markle married in May 2018 at Windsor Castle, the royal family seemed to welcome the Duchess of Sussex, a glamorous former TV star. The pair was seen as providing a fresh young face for the monarchy of an increasingly multicultural nation.

It didn’t take long for the fairytale to unravel.

During the Winfrey interview, the duke and duchess shared they are expecting a girl due this summer.