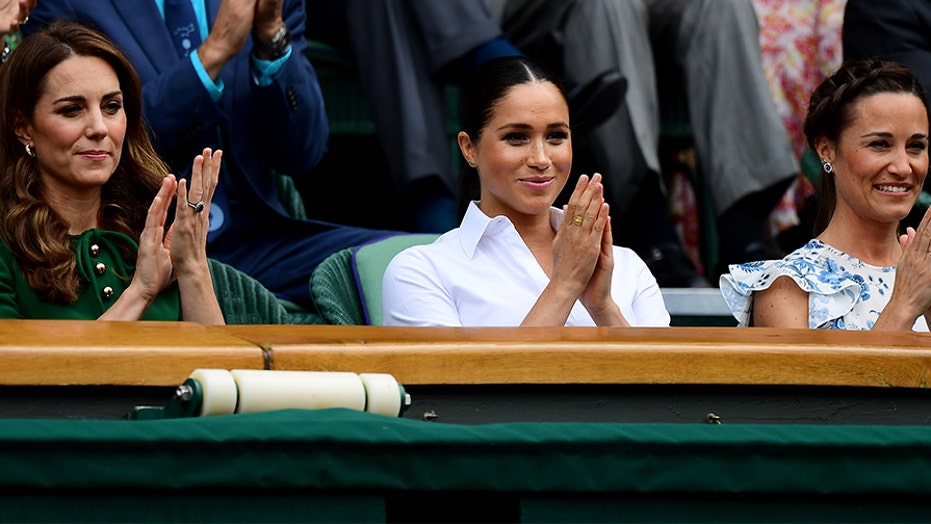 Meghan Markle pulled out of Pippa Middleton and James Matthews’ wedding out of fear she would “create a media circus.”

The claim is being made in the bombshell book “Finding Freedom,” written by royal reporters Omid Scobie and Carolyn Durand. Numerous palace insiders came forward to the two journalists and detailed what led to the Duke and Duchess of Sussex’s departure as senior members of the British royal family.

The couple currently resides in Markle’s native California with their son Archie.

On Wednesday, the U.K.’s DailyMail reported Middleton, 36, and her mother Carole Middleton, 65, “reluctantly” invited the 39-year-old to the May 2017 celebration but “privately harbored concerns” that her appearance with Prince Harry, 35, would “overshadow the main event.”

“Meghan put careful thought into her outfit, leaning heavily on Jessica Mulroney to pull together an ensemble that was stylish without being splash when walking into church with Harry,” the authors wrote, as quoted by the outlet.

(L-R) Catherine, Duchess of Cambridge, Meghan, Duchess of Sussex and Pippa Middleton attend the Royal Box during Day twelve of The Championships - Wimbledon 2019 at All England Lawn Tennis and Croquet Club on July 13, 2019, in London, England. (Photo by Shaun Botterill/Getty Images)

The authors alleged that the former American actress ultimately pulled out of attending “at the last minute” after a newspaper article published the headline: “It’s Meghan v Pippa in the…Wedding of the Rears.”

Pippa, the younger sister of Kate Middleton, originally caused a stir at the Duchess of Cambridge’s royal wedding to Harry’s older brother Prince William in 2011. For the televised ceremony, Pippa famously wore a curve-hugging dress that accentuated her backside.

“If they were worried their arrival might create a media circus despite taking every precaution, now they had no doubt it would,” the authors claimed. “Meghan’s church outfit, and Philip Treacy hat, would have to be worn another time.”

Scobie and Durand claimed that Markle was dropped off an Airbnb close to the church during the service. And when it came time to attend the reception, Markle changed into a “decidedly unflashy long black gown and did her own makeup” before Harry joined her for lunch and drove her to the grounds of the Middleton family home.

Pippa Middleton and her husband, James Matthews, smile following their wedding ceremony at St Mark's Church in Englefield, west of London, on May 20, 2017. (REUTERS/Justin Tallis/Pool)

MEGHAN MARKLE’S FAITH IN GOD GOT HER THROUGH THE ‘DARKEST MOMENTS’ OF HER LIFE, BOOK CLAIMS

“Sitting together in the custom glass marquee that had been erected on the 18-acre property should have been a fun night for the couple but, per Pippa’s request, no couples sat together,” the authors wrote, as quoted by the outlet.

“The old Harry would have certainly closed out the bash with the rest of his friends,” they continued. “Instead, he and Meghan spent most of their time chatting about their evening apart.”

While it was initially reported that Harry and Markle cooperated with the authors, reps for the couple confirmed to Fox News that they played no part in the tell-all.

The Duke and Duchess of Sussex are currently residing in California. (Getty)

“Finding Freedom" is currently available in bookstores and online.