Meghan Markle reminded fans that she began humanitarian work before she even met Prince Harry and became a royal.

Taking to the couple's official Sussex Royal Instagram account on Friday, the 38-year-old Duchess of Sussex shared a variety of photos from her charity efforts over the years, dating back to March 2016, months before she and Harry met on a blind date.

The post was in honor of International Day of Education, and the caption explained that Prince Harry and Markle "highlight the importance of access to education for all."

MEGHAN MARKLE, PRINCE HARRY TO RECEIVE SECURITY 'WHETHER OR NOT THEY ARE ACTIVE' ROYALS: EXPERT

One photo shows Markle smiling in front of a young girl in Rwanda in what appears to be a classroom. The same photo first appeared online in 2016 when it was shared by World Vision, a global relief and advocacy organization. On its website, the foundation explained Markle was "able to see firsthand the impact that clean water has on the lives of children and communities in Africa."

The caption reads: "The Duchess of Sussex has focused on this both prior to becoming a member of the Royal Family and now as patron of The Association of Commonwealth Universities (@The_ACU_Official). Working closely with CAMA, both the Duke and Duchess recognise the benefit both personally and to society at large when a young girl has access to education. On their recent tour to Southern Africa, The Duke supported the initiatives of @Camfed on the ground in Malawi."

The post explained that Meghan had previously traveled around the world to support education in developing communities, with a focus on helping to support young girls. 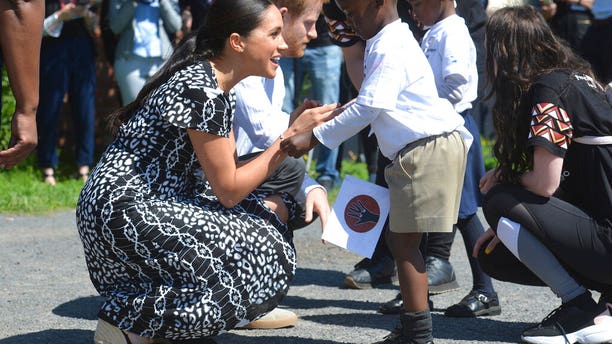 "Over the years, The Duchess has worked in developing communities, such as in Rwanda and India, to find the hindrances to girls' ability to go to school and furthermore to stay in school. These can include lack of access to clean water, stigma surrounding MHM, cultural taboo, and many more reasons.

"As President and Vice President of The @Queens_Commonwealth_Trust, The Duke and Duchess thank all those who are working to give access to education for all."

Other snaps in the post feature Prince Harry and Markle in Malawi last September and in South Africa, also in 2019.

The social media post about Meghan's pre-royal life comes on the heels of the couple announcing their plan to "step back" as senior royals and earn their own living. This week, Harry reunited with Markle and their son, Archie, 8 months, in Canada.