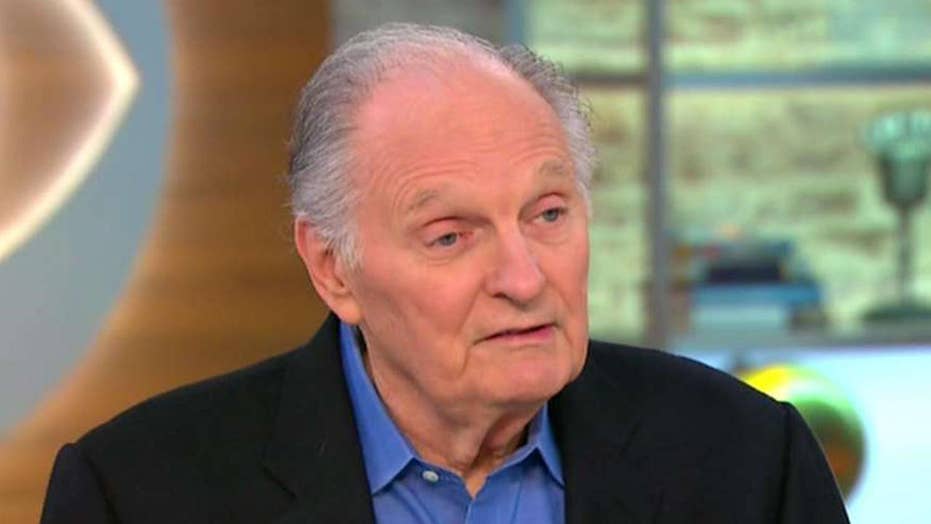 At age 84, Alan Alda insisted he’s doing just fine at his home in Long Island, N.Y., with his wife of 63 years amid the coronavirus pandemic.

“I’m having a good time under the circumstances,” the actor told AARP the magazine for the June/July issue.

“I’ve found a lot of positive things,” the “M*A*S*H” star continued. “I’m very happy about some of the changes we’ve had to go through. For one thing, my wife Arlene is looking for ways to be creative during this time, so she’s gone back to painting and drawing, and she plays the piano every day and she’s experimenting with cooking. I haven’t eaten this well since the last epidemic.”

Alda, who famously played Benjamin Franklin “Hawkeye” Pierce in the hit ‘70s series, is prepared to cope with tough times. According to the outlet, Alda was diagnosed with polio at age 7 and underwent six months of therapy that involved scalding blankets wrapped around his limbs every hour.

“It was hard on me,” he said. “It was harder, I think, on my parents, who couldn’t afford a nurse and had to torture me themselves. It’s always better to pay somebody to torture your kid.”

It wouldn’t be the last time Alda was faced with a health battle. In 2015, Alda learned he had Parkinson’s disease.

“I began to exercise a lot,” he said after receiving the diagnosis. “A lot of people hear they have Parkinson’s and get depressed and panicky and don’t do anything, just hoping it’ll go away. It’s not going to, but you can hold off the worst symptoms. Movement helps: walking, biking, treadmills. But also specific things: I move to music a lot. It’s not the end of the world when you get this diagnosis.

“You know, with the world changing so rapidly, there’s no point in being optimistic or pessimistic about anything,” Alda shared. “You’ve just got to surf uncertainty because it’s all we get.”

Back in February 2019, the Golden Globe and Emmy winner recalled to Fox News what it was like filming the final episode of “M*A*S*H” titled “Goodbye, Farewell and Amen,” which he also directed. The Washington Post reported more than 106 million viewers watched the series finale. The outlet shared the episode was so highly anticipated that 30-second advertising slots sold for $50,000, more than some slots for the 1983 Super Bowl.

In addition to this, United Press International reported an estimated million viewers in New York City alone used the toilet after the show ended, pouring 6.7 million gallons of water through the city’s sewers.

Alda said the pressure was on to deliver a final goodbye that fans wouldn't forget.

“I wanted to end it in a way that showed that everybody was going home with some kind of wound from the war,” said Alda. “That the war didn’t leave anybody the way they were when they started. Sometimes it was physical wounds and sometimes it was emotional. We wanted to be authentic about that and genuine.”

JOAN COLLINS RECALLS LOSING HER CHILDHOOD HOME DURING WWII: ‘IT HAD BEEN COMPLETELY DESTROYED’

“I also wanted to give everybody a goodbye, including the extras,” Alda continued. “You know, the audience got to know the extras on the show. So I gave them all speeches about what they were all going to do when they got home. Which didn’t always go well with them because they weren’t used to acting, they were all used to being in the background.”

The star admitted he was faced with even bigger obstacles.

“The other challenge directing the final episode was the outdoor location that we used in the mountains of Malibu,” said Alda. “It caught fire on a Friday night or Saturday morning and the entire set burned to the ground. I still had a lot of scenes to shoot there. So I spent the weekend rewriting the script and wrote a fire into it. And the rest of the show took place in another location. But that’s what one of the fun things that happen when you’re acting. You have everything prepared. Everything is all set up to go, and then at the last minute, you have to improvise, which is exciting.”