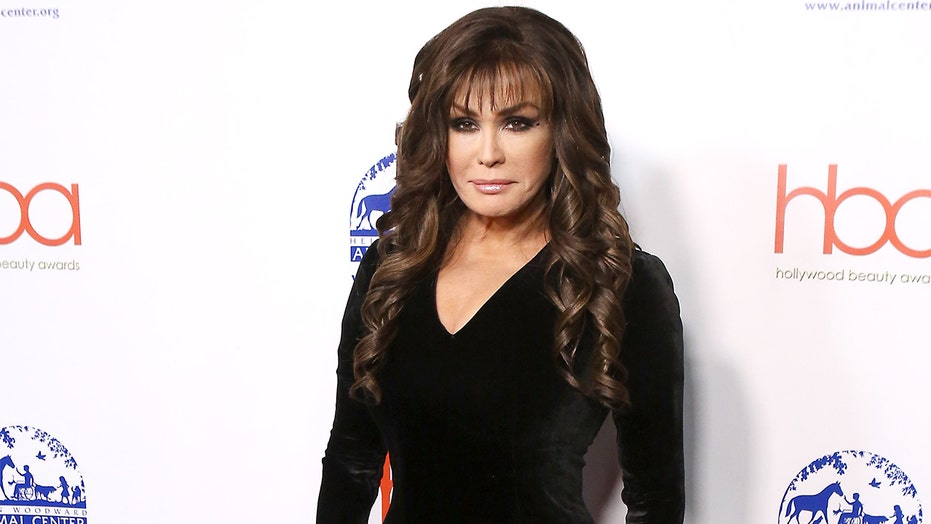 EXCLUSIVE: At age 61, Marie Osmond is eager for what the future holds for her.

Just one year after the performer took over the role of co-host from Sara Gilbert in the CBS daytime show "The Talk," Osmond announced in late 2020 that she was leaving to focus on new projects. A year prior, Osmond and her brother Donny Osmond ended their 11-year Las Vegas residency.

Fast forward to 2021, Osmond has been happily spending extra time with her family. The "Paper Roses" singer shared that after years of struggling with her weight, she now has the energy and drive to run around after her seven grandchildren. And the former "Dancing with the Stars" contestant now hopes her journey in celebrating her body will encourage others to revamp their lifestyles and make new healthy habits.

Osmond spoke to Fox News about maintaining her 50-pound weight loss, her favorite health tip, escaping the so-called child star curse, and why she won’t be reuniting with Donny, 63, on stage.

MARIE OSMOND IS LEAVING 'THE TALK' AFTER ONE YEAR

Fox News: From a young age, you were told to lose weight. How did you make sense of that?
Marie Osmond: You don’t, unfortunately. Fortunately, I had great parents and a strong belief in God. I was 103 pounds and producers told me I was fat. I was 15. Are you kidding? That’s insanity. Telling a 15-year-old who’s 103 pounds she’s fat is ridiculous.

… [But] I made peace with myself. I said to myself, "You know, little body, you have been really good for me. You hung around when I’ve been brutal to you. Now it’s time for me to be kind to you." I don’t think we love our bodies enough and appreciate what it does for us.

Fox News: What would you tell your younger self today?
Osmond: I would tell her she’s going to have a wonderful life. You can either sit on all the negatives and worry about the what-ifs, or you can take care of yourself, the incredible body that God gave you.

We’re all different. It’s the comparing that makes us miserable. I tell my kids today, "Don’t worry about a relationship. Figure out who you are first. Learn about yourself and discover what’s best for you first so you don’t become something for someone else."

MARIE OSMOND SHOWS OFF HAIR TRANSFORMATION: 'I THINK BLONDES DO HAVE MORE FUN!'

Marie Osmond has made peace with her body over the years. (Jon Kopaloff/FilmMagic/Getty)

Your 20s should be the most beautiful moments of your life, a time of self-discovery. Use that time to care for yourself, figure out who you are. That’s what I would tell my younger self. Just love life more, quit worrying so much about the external and focus more on the internal.

Fox News: You’ve lost 50 pounds and have maintained that weight loss for 14 years. Where does your willpower come from?
Osmond: I grew up in an industry that was all about starvation and being a size zero. Food from day one was an enemy. My body just got so messed up and I started packing the weight on. I had tried every diet you could imagine.

Nutrisystem was really a last-ditch effort. I was doing "Dancing with the Stars" at the time and I had to lose weight because 50 pounds in spandex was not a pretty combo. And I couldn’t just starve and dance. That would be impossible. So I started about a month prior to doing the show.

And for me, it stuck. I never felt hungry and I was learning how to make healthier choices for myself. And that’s the thing. For me, it’s no longer about being skinny. It’s about being healthy. I want to take care of myself. You can’t live life if the shell that you’re living in is broken. You have to start with the physical. You have to have a healthy body to have a healthy mind.

Dragging extra weight around just takes time away from you. There’s no way I could be on the floor and running around with my grandkids. I couldn’t do it then. Those are the things that matter to me more than anything. So it makes you wonder, "Do I want 10 more years?" "What do I want to do for the next decade of my life?" I know I couldn’t have done this past decade of my life if I still had those 50 pounds on me. You have to make those choices.

Guest co-host and new grandmother Marie Osmond debuts the latest addition to her family, a grandson, on 'The Talk.' (Sonja Flemming/CBS via Getty Images)

Fox News: Do you have a favorite health tip or trick?
Osmond: Get a podcast and go out for a walk. I never listen to a podcast unless I’m moving somehow. And there are so many shows available that it’s easy to find something that speaks to you. So for 2021, don’t listen to your podcast unless you’re walking. It’s a really great and easy way to get off the couch, go outside, walk and stimulate your brain and blood. I even do it with audiobooks too. It’s a nice way to do something for yourself.

Marie Osmond said she started Nutrisystem a month before appearing on 'Dancing with the Stars.' (L. Cohen/WireImage/Getty)

Fox News: You’ve led an incredible career. As you can imagine, a lot of child stars tend to fade away as adults. How did you escape that?
Osmond: I don’t know if I’ve escaped it completely. There’s a stigma in being a child celebrity… But I think it starts with family. My mother saved me… I remember when I was doing "Donny & Marie," I was about 17 at the time.

I was working 17,18 hour days and we had to memorize 350-page scripts in two and a half days. It was a lot of work and I went to school so I would come home late at night. I remember one time I said, "Mother, I have to go to bed. We’re taping in the morning and I need to look good."

She goes, "You have chores to do." And I said, "Mother, I’m like Marie Osmond." *laughs*. She said, "Really? Well, you can clean the toilet too. [TV] is your job. This is reality." I think the way my parents raised me and my belief in God made all the difference. You have to look at the big picture and see what’s important. But you’re right, not a lot of people make it.

And look, life wasn't always easy. I've dealt with abuse. But... I didn’t want my past to define my future. The best way to not let the past define you is to live positively for the future and to make the best choices for you. Giving back has always been important in my career, too.

Fox News: Your brother Donny is expected to headline a show in August. Are you going to miss sharing the stage with him?
Osmond: You know, we’re just moving in different directions. I love him. I’m happy for him, but I’m really loving producing and filming now. And we’ve always done our own careers. Hey, Vegas was supposed to be six weeks and it ended up being 11 years.

They told us, as we left Caesar’s group, that more people came to our shows and watched them than Celine Dion and Elvis Presley combined. And we did more shows than they did. That’s nuts! It was just supposed to be six weeks.

Donny and Marie Osmond during their final performance at Flamingo Las Vegas on November 16, 2019, in Las Vegas, Nevada. (Denise Truscello/WireImage/Getty)

But we’re in different places musically right now. Donny’s a crooner, and he’s great. And I’m so happy for him. But [those shows] take a lot of time and commitment that is hard for me to do right now. I can’t do other things if I lock in a residency. But he will always be my Donny.