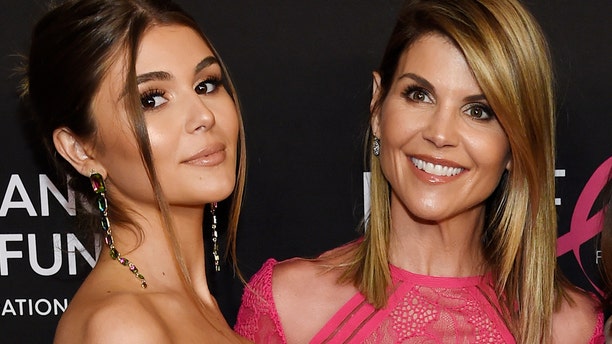 Actress Lori Loughlin poses with her daughter Oliva Jade Giannulli, who are both embattled in the ongoing college admissions scandal. (AP)

Days before her mother, “Fuller House” actress Lori Loughlin, was arrested for her alleged role in a massive college admissions scam, her daughter appeared on a talk show to discuss her college acceptance experience.

Olivia Jade Giannulli is a popular YouTube star and daughter to Loughlin and fashion designer Mossimo Giannulli. Her parents are in hot water after it was revealed that they paid roughly $500,000 to get their two daughters into the University of Southern California by designating them as recruits to the school’s crew team despite having no experience with the sport.

Giannulli, 19, appeared on the March 8 episode of the “Zach Sang Show,” where she discussed her fans asking her about college admissions in an interview that’s been cast in a whole new light given the allegations against her parents.

“It’s the coolest thing getting DMs from girls being like, ‘I’m applying to college right now, what did you do?’ It’s fun,” she said.

She continued noting that, despite her success as a YouTube personality, it was at the behest of her parents that she decided to go to college in the first place.

“Mostly my parents wanted me to go because both of them didn’t go to college. I’m so happy they made me go. That sounds so terrible, they didn’t make me,” she said. “My sister [Isabella Rose] goes to the same school and we are pretty much inseparable, so it was nice following in her footsteps in a little bit. I do like it.”

“It’s the coolest thing getting DMs from girls being like, ‘I’m applying to college right now, what did you do?’ It’s fun,”

Earlier on Wednesday, Loughlin was taken into custody in connection with the scheme in which other wealthy parents allegedly paid bribes to get their children admitted into top colleges. She was released later on a $1 million bond and is permitted to travel to Canada to film a movie.

USC TO 'REVIEW' STUDENTS, GRADS WHO MAY BE LINKED TO COLLEGE ADMISSIONS CHEATING SCANDAL

On Tuesday, Giannulli appeared in court and was released on $1 million bond as well, secured by the couple's home. The judge ordered that Giannulli restrict his travel to the continental United States and surrender his passport.

This isn’t the first time that Giannulli has made some questionable comments about her college life. In August 2018, the 19-year-old posted a video on YouTube that she later apologized for after fans criticized her for taking her university experience for granted.

“I don’t know how much of school I’m gonna attend,” she told nearly two million subscribers. “But I’m gonna go in and talk to my deans and everyone, and hope that I can try and balance it all. But I do want the experience of like game days, partying… I don’t really care about school, as you guys all know.”

She later apologized saying: “I said something super ignorant and stupid, basically,” admitted Giannulli in the video. “And it totally came across that I’m ungrateful for college — I’m going to a really nice school. And it just kind of made it seem like I don’t care, I just want to brush it off. I’m just gonna be successful at YouTube and not have to worry about school. I’m really disappointed in myself.”