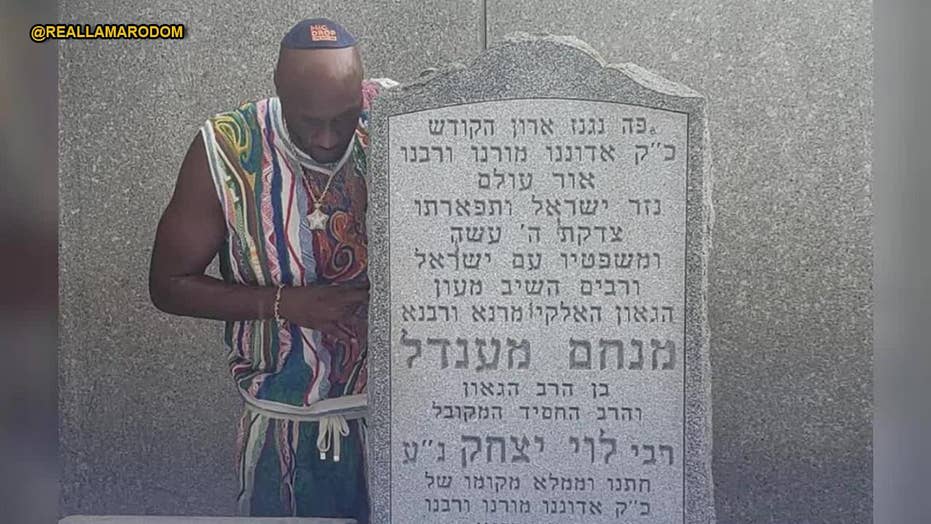 Lamar Odom donned a skullcap during a moment of prayer, while visiting the grave of the Lubavitcher Rebbe Menachem Schneerson in Queens, N.Y. with his two children. Odom shared the moment on social media, saying that Schneerson, who is often referred to as 'The Rebbe,' shared 'a beautiful message of love and kindness to the world.'

Lamar Odom shared a personal moment of prayer at the grave of the Lubavitcher Rebbe Menachem Schneerson in Queens, N.Y.

Odom donned a skullcap in the photo as he stood at the final resting place for the leader of the Chabad-Lubavitch movement, an Orthodox Hasidic sect of Judaism.

The basketball player shared that Schneerson, who is often referred to as "The Rebbe," was introduced to him by his mentor, Rosh Lowe, a former Broadway child actor turned speaking coach.

NAOMI CAMPBELL PRAYS AT LUBAVITCHER REBBE'S GRAVE: I HAVE 'LEARNED SO MUCH FROM HIS WISDOM'

"Today, I and my 2 children, Destiny and LJ, visited the gravesite of the spiritual leader and founder of the Chabad movement, Rabbi Menachem Schneerson. He is the mentor of my speaking coach, Rosh Lowe, and shared a beautiful message of love and kindness to the world," Odom tweeted on Thursday.

Supermodel Naomi Campbell also recently visited the Rebbe's grave on the 25th anniversary of his death.

The British-born beauty shared he had a profound impact on her life as she visited his gravesite to "gain blessing and inspiration."

"I would not normally show my prayers at the Lubavitcher Rebbe (Rabbi Menachem M. Schneerson)'s resting place, but since I was snapped I decided to put it out myself. In honor of #TheRebbe and his vital teachings 25 years after his passing," she wrote alongside two photos of herself at his grave.

The 49-year-old model shared more about the Rebbe's influence on her life in a second post on social media.

"An inspirational leader, scholar, and teacher, the Rebbe taught that we are all inherently good and we each have the potential to change the world for the better, one good deed at a time. I have personally learned so much from his wisdom and teachings, and while I never met him," Campbell shared in the lengthy post.

"With so much discord and division across our society, the Rebbe's words are more relevant than ever, and we so desperately need to take them to heart and learn from his example to always see the good in others, even those with whom we may disagree. Today I rededicate myself to the Rebbe's life-long mission of creating more light and goodness, and making a better future for ourselves and all of humanity."

Campbell wasn't the only celebrity to honor the Rebbe's memory. Paula Abdul shared a message about the Rebbe's Sabbath candle campaign, which encourages all Jewish women and girls to mark the start of the Sabbath by lighting candles.

"His teachings to better our world through unconditional love are more urgent now than ever! Join me in his Shabbat Candle campaign, spreading light before sundown this evening," Abdul shared on Twitter.

According to The Times of Israel, 400,000 people visit the Rebbe's gravesite each year.