Kathy Griffin gets support from Al Franken: 'I think she can recover' 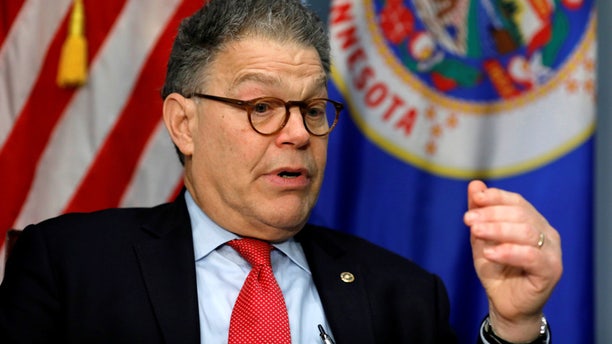 Al Franken is stepping up to support his friend Kathy Griffin after she sparked public outrage with a controversial photo shoot where she is seen holding a bloodied mask of President Donald Trump.

The 66-year-old senator and former “Saturday Night Live” writer told CNN’s Alisyn Camerota on “New Day” that while he believed the images went too far, the 56-year-old comedienne can survive the backlash.

“Kathy is a friend and she’s a terrific comedian, but this had no business being in our public discourse,” explained the Minnesota Democrat. “And I talked to her. She has apologized… she actually begged for forgiveness and I believe in forgiveness.”

Franken also added Griffin will be able to recover from the scandal.

“I think she did the right thing asking for forgiveness and acknowledging that this is a horrible mistake, so I think she can," he said.

Griffin admitted Tuesday she “went too far” on her latest photo shoot with photographer Tyler Shields. In a Twitter post, she said the image “is too disturbing” and “it wasn’t funny.”

Shields told Fox News on Tuesday that Griffin was hoping to create a bold message.

KATHY GRIFFIN NOT THE FIRST CELEB TO MAKE CONTROVERSIAL JOKE

“Kathy and I are friends and we work together before, so when we started doing this shoot, she said, ‘I’d love to do something political. I’d love to make a statement,’” he explained. “We kind of figured out what would be the best image to make out of that.”

Shields added the image was meant to serve as art and he’s aware that it could make some viewers uncomfortable.

As for his recent collaboration with Griffin, he doesn’t regret it.

“I can’t speak for her, [but] I know she loves to stir the pot,” he said. “For me, I love the idea we have freedom of speech. The fact that I’m allowed to make an image like this says a lot. To me, that’s a powerful thing… nobody’s killed me for this image so it’s not that bad. I love Kathy and I hope they let me visit her in Guantanamo.”