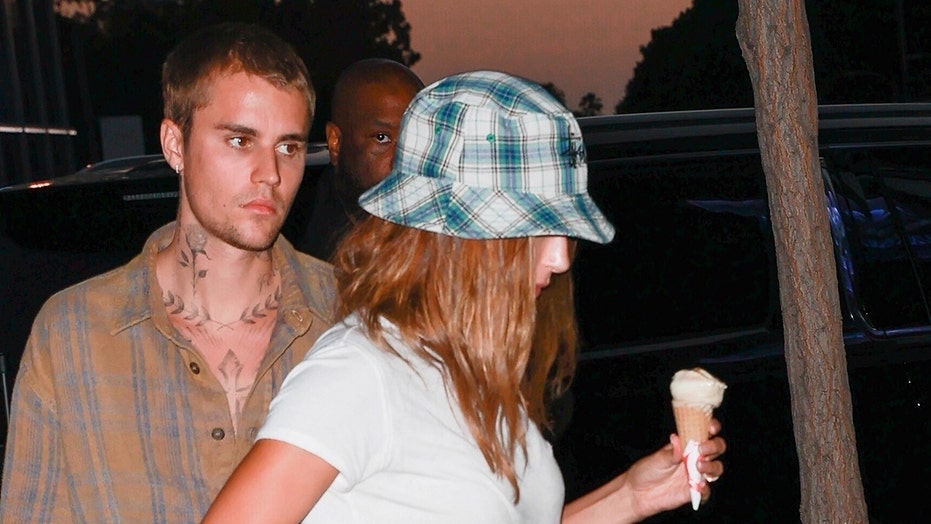 Justin Bieber and his wife Hailey Baldwin were spotted enjoying ice cream after a date night on Wednesday.

Baldwin was seen holding onto the pop star's arm after enjoying an ice cream cone. Before the sweet treat, the couple had dined at Sushi Park in West Hollywood.

The 24-year-old model wore a white crop top paired with black pants and a plaid bucket hat while the "Yummy" singer, 27, wore a button-down with baggy jeans.

The couple first publicly discussed their relationship in February of 2016. Bieber and Baldwin would date for months before having a fallout. The pair reconnected in 2018 after Bieber ended his rekindled relationship with Selena Gomez.

In September of 2018, Bieber and Baldwin reportedly got married at a courthouse.

Bieber wouldn't publicly refer to Baldwin as his wife until November. The couple would host an official wedding ceremony in September of 2019 in South Carolina.

Justin and Hailey had dined at Sushi Park in West Hollywood before grabbing an ice cream cone. (RACHPOOT / BACKGRID)

Baldwin previously credited their faith as the reason the couple is together.

"They ask me all the time, 'What would you say is the biggest thing in your relationship? You guys are really happy,"' Baldwin told actress and comedian Yvonne Orji on her YouTube episode "A Conversation With" in June.

Justin and Hailey reportedly tied the knot in 2018, but didn't have an official wedding until 2019. (RACHPOOT / BACKGRID)

Most recently the couple has had to fight off pregnancy rumors.

Bieber captioned a photo of himself with Baldwin, "Mom and dad."

The caption sent many fans into speculation that the couple was expecting before Baldwin herself shut it down.

"I think you should maybe change this caption to *Dog Mom and Dad* before anyone gets it twisted," Baldwin commented alongside a laughing emoji.