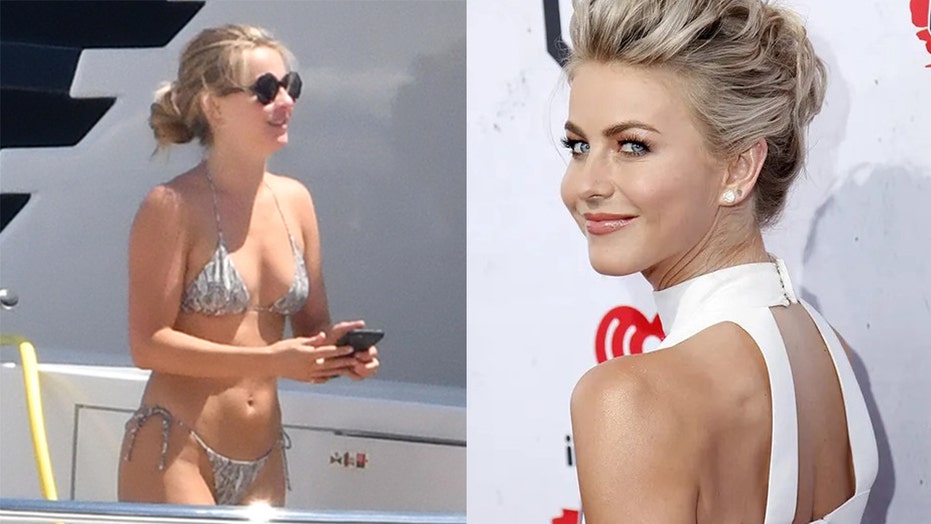 Julianne Hough showed off her fit physique in a tiny bikini while cruising the Amalfi Coast in Italy on Monday.

The 32-year-old "Dancing With the Stars" alum was spotted wearing a silver printed two-piece while enjoying drinks on a yacht with family and friends. She later took a dip in the water before returning to the craft soaked and smiling.

Hough was also photographed rinsing the ocean water out of her hair, applying a tanning oil, striking a few sexy poses and taking in the scenery with her pals and their children.

Later that evening, the blond beauty changed into an all-white ensemble and took the stage with a local band, appearing to sing a few tunes with the musicians.

Julianne Hough was spotted wearing a silver printed bikini while vacationing in Italy.

Hough’s latest trip comes six weeks after the pro dancer vacationed in Costa Rica, where she also wore a barely-there bikini along with a cover-up, which she admitted didn’t do much to conceal her curves.

"Feelin’ fancy and free in this sage green ‘cover’ up… not that it’s covering much," the singer joked on Instagram in May.

"When do you feel the most free?" she went on to ask her followers. "It’s definitely when I’m dancing and embracing the natural elements surrounding me!"

Julianne Hough takes in the Italian sunshine during her fun-packed holiday on the Amalfi Coast. (Cobra Team / BACKGRID)

The TV personality has been exploring her freedom ever since filing for divorce from Brooks Laich in November 2020, five months after the two announced their split.

She and the former NHL player, 38, married in 2017, two years after getting engaged.

Hough spoke candidly about her sexuality in 2019, revealing in an issue of Women’s Health that she’s "not straight."