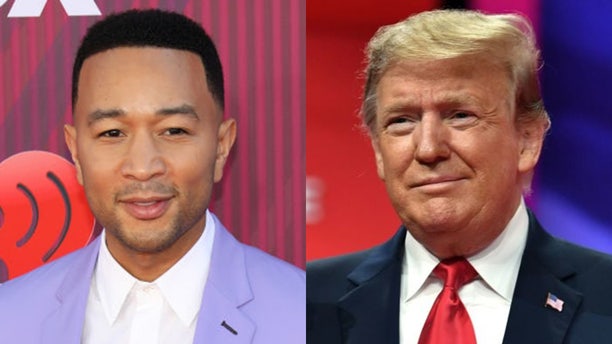 John Legend said that President Trump "needs to apologize for demonizing Muslims" after 50 people were killed at mosque shootings in New Zealand. (Getty)

John Legend said that President Trump needs to speak out against hateful ideology, and "needs to apologize for demonizing Muslims" after 50 people were killed at mosque shootings in New Zealand on Friday.

The singer, in an interview published by NowThis on Sunday, said that, following shootings that occurred in Christchurch, in which dozens were killed and injured, the president owes an apology.

Following the massacre, Trump said the attacks were a "horrible, horrible thing," but later said that illegal immigrants seeking to enter the U.S. are part of an "invasion."

"When people of such influence and such stature are endorsing such a hateful, evil ideology, it emboldens those who will go out and do something really evil and nasty, like what happened in New Zealand," Legend said. "We need the president to speak out against it."

Legend, 40, said Trump has "been wrong using this rhetoric and anyone who's encouraged him or cheered him on in this kind of rhetoric needs to apologize as well."

GILLIBRAND HITS TRUMP OVER WHITE NATIONALISM COMMENTS: 'WE HAVE TO BE BETTER THAN THIS'

The alleged gunman of the attack called Trump "a symbol of renewed white identity," but Trump downplayed any threat posed by white nationalism.

He said he didn't believe white nationalism was a rising threat around the world, and said: "I think it's a small group of people that have very, very serious problems, I guess. ... If you look at what happened in New Zealand, perhaps that's the case. I don't know enough about it yet. But it's certainly a terrible thing."

Trump, who as a candidate proposed a ban on all Muslims entering the U.S., has drawn criticism as being slow to condemn white supremacy and related violence. After a 2017 clash between white nationalists and anti-racist protesters in Charlottesville, Virginia, that left one demonstrator dead, Trump said there were "very fine people on both sides" of the confrontation.

Many experts who track violent extremists have identified white nationalism as a growing threat in the U.S. and abroad. In January, for example, the New York-based Anti-Defamation League said domestic extremists killed at least 50 people in the U.S. in 2018, up from 37 in 2017, and said, "White supremacists were responsible for the great majority of the killings, which is typically the case."