Greta Thunberg has done the impossible – and overtaken cyclists at the top of Jeremy Clarkson’s Most Hated list.

The motoring show host has accused the 16-year-old climate change activist of being a big reason why young people today hate cars.

Speaking exclusively to The Sun, Jeremy, 59, ranted: “Everyone I know under 25 isn’t the slightest bit interested in cars — Greta Thunberg has killed the car show.

“They’re taught at school, before they say ‘Mummy and Daddy’, that cars are evil, and it’s in their heads.”

His long-term sidekick Richard Hammond, 49, agrees: “I hate to say it, but I think Jeremy is right.

“Young people don’t care about cars. How many kids now are growing up with posters of cars on their bedroom wall?”

Yet despite their Greta gripes, the Swede’s eco-concerns have finally filtered through to their show.

For the first time since Jeremy, Richard and co-host James May began working together more 20 years ago, on the BBC’s Top Gear, they have been filmed discussing climate change ­— and not mocked it. 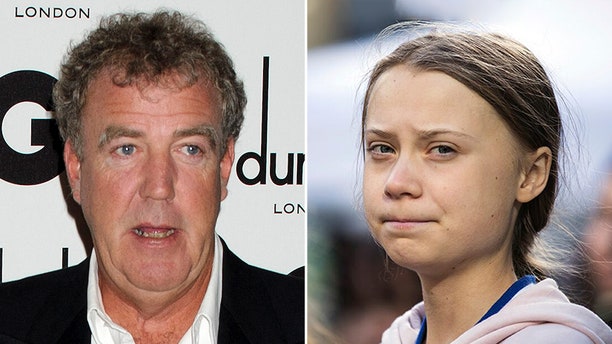 Global warming’s effects feature heavily in next month’s special titled, The Grand Tour Presents: Seamen, which is the first in a series of epic adventure specials, consisting of feature-length episodes and will be available on Amazon Prime Video on December 13.

They planned the trip for the rainy season — but when they arrived in South East Asia it wasn’t raining.

The Mekong river system was practically bone dry, with boats sat on mud as millions of fishermen and farmers pondered how to make ends meet.

During the episode, Jeremy acknowledges the irony of a motoring journalist of 30 years high-lighting global warming — while riding a bicycle.

But he admitted to me that he and his fellow petrolheads have always had to make light of the issue because “otherwise you’re Lewis Hamilton."

The six-time Formula One world champion posted this month on Instagram how he feels like “giving up on everything” because of what a “messed up place” the world is thanks to climate change.

But Jeremy adds: “For the first time ever, we’ve had global warming rammed down our throats — and we’ve not been idiotic, it’s very definitely a thing. You can change your mind.

"Only an idiot doesn’t change their mind when faced with irrefutable evidence. The question is, what to do about it? That’s a more interesting debate than what is happening.”

But turning to Greta again, he says: “She’s an idiot. Going round saying we’re all going to die, that’s not going to solve anything, my dear.”

So now that Jeremy, Richard and James are educating the masses about the environment, have they gone a bit, dare I say, woke?

“Have you seen us?!” splutters Richard — while Jeremy vents: “No, I’m not — I’m 60. Woke? You tried writing it then spell-checking?

"If you do a grammar check, it says, ‘Do you mean woken?’ Not even my computer recognizes woke as a word.

“Now, what I could do is go on strike, borrow a 50ft carbon-fiber yacht with back-up diesel engine, sail to America and shout at President Trump.

“I could do that, but it would achieve nothing. So instead, it’s time to talk to scientists.”

Scrapping TV car reviews and moving away from the traditional studio in favor of the new “specials” makes for epic viewing — they are like feature-length movies in terms of how they are filmed and their timespan.

Jeremy says: “There has never been a television program like this before, it’s groundbreaking in terms of scale.

“Just think, when the three of us started standing around a Ford Fiesta and saying, ‘I think the radio is a bit too far away’, to powering from Cambodia into Mykon with Creedence playing, it’s a world away from that.”

He also reckons the specials will be difficult for his old BBC show Top Gear — now fronted by Andrew Flintoff, Paddy McGuinness and Chris Harris — to top.

LEONARDO DICAPRIO PRAISES GRETA THUNBERG AS ‘A LEADER OF OUR TIME’

He says: “The BBC has to spend money to make shows for two in the afternoon, so it can’t spend as much on the shows it’s very good at doing.

James, 56, adds: “It would be difficult to do a special like us. I watch Top Gear and they watch us, it’s a healthy rivalry.”

The epic footage of Seamen climaxes during the last stretch of the presenters’ journey when they have to navigate past huge cargo ships on a stretch of sea leading to the port city of Vung Tau.

The conditions were so bad, four local fishermen perished in the choppy waters the same day as Jeremy, Richard and James tackled the trip in unsuitable riverboats.

The trio now admit they feared for their own safety. Jeremy, who returned to shore first, recalls: “It was deeply unpleasant and uncomfortable — but my boat was good.

“I was mildly concerned about James, and it hadn’t occurred to me about the camera crews. Some were on a great big ferry, others were on small boats which were filling up with water.

ARNOLD SCHWARZENEGGER RIDES BIKES WITH GRETA THUNBERG: SHE'S 'ONE OF MY HEROES'

"There was a thought of, ‘S**t, what if someone has gone down?’ I was there alone for quite a while — the gap between me and anyone else was a good hour — during which time I had some concerns, which I alleviated by having several beers.

“I sat in that harbour bar thinking, ‘The only thing I can do is have another beer’.

“My main concern was, ‘I haven’t got any money on me so if they’re all dead, who is going to pay for all the beer I’ve drunk’.”

Richard, who suffered a serious head injury after crashing a jet-powered car in 2016, added: “I got that panicky sense.

“I learned from the past, just because you’re doing TV doesn’t mean you’re in some sort of magic bubble of safety. Things can go wrong, so I’m probably more aware than most.

“It just was physically brutal because the boat kept moving and bouncing around and, as I’m not a boating person, I didn’t know what it could or should do.

"Every time it stood up on it’s back end I thought it was going to sink. It was mentally draining. We were out of our comfort zones the whole show because we were in boats — so it magnified everything.

“Also, being stuck on our own — usually we were surrounded by crew — you’re left thinking, ‘Am I going to die on my own?’”

James says: “My fear was that I was going to get into serious trouble. I didn’t know if I was the first to get there, or the last, or the only one.

“But to my immense disappointment, when I got off at the end, they were both there.”