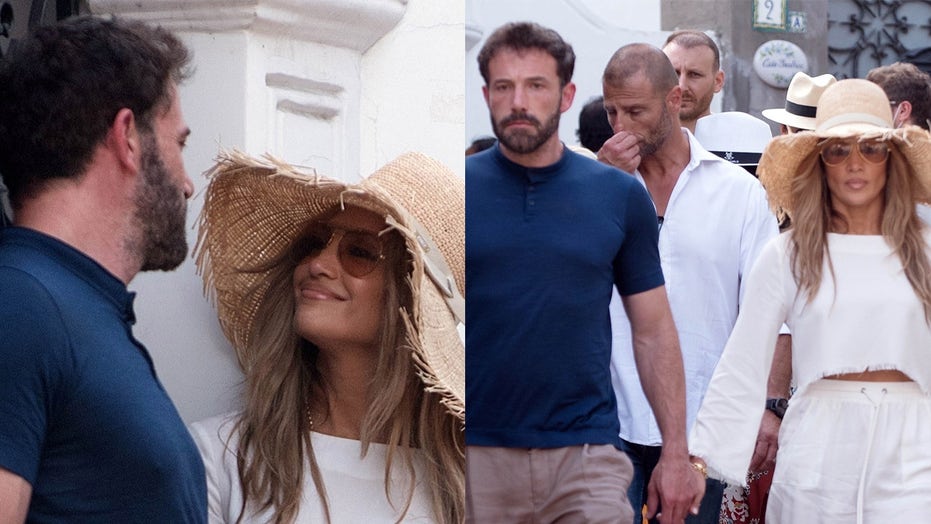 Jennifer Lopez is loving her time with Ben Affleck.

Just days after the two stars made their romantic reconciliation Instagram official, they were spotted enjoying time together during an Italian getaway.

For their day out-and-about, Lopez donned a simple white shirt and matching shorts with sandals, sunglasses, gold jewelry and a large floppy sunhat.

JENNIFER LOPEZ MOCKS BEN AFFLECK'S ‘AWFUL’ PHOENIX BACK TATTOO IN RESURFACED VIDEO: ‘WHAT ARE YOU DOING?’

During their outing, Lopez, 52, was spotted gazing lovingly at her beau as they leaned against a doorway.

They were spotted out for a stroll in Capri, Italy on Tuesday.

In a photo obtained by TMZ, the two actors were also spotted sitting together at what appeared to be a restaurant.

According to the outlet, Lopez and Affleck stopped at a restaurant called Ristorante Faraglioni, but didn't eat much. Instead, they let the paparazzi have some fun snapping pics.

Sources also said that the duo hit up a jewelry store and a vintage Chanel shop.

The pair's European vacation has been jam-packed with both adventure and PDA.

They recently jetted off to the French Riviera and were snapped relaxing on a luxurious yacht and partying at a club in St. Tropez. She donned a $650 bikini and matching $2,300 cape, both by Valentino.

While enjoying the Southern France sun, JLo and Affleck seemingly recreated his famous butt grab from her music video "Jenny from the Block."

Lopez and Affleck, 48, were first spotted together in late April after she ended her engagement to Alex Rodriguez just a few weeks earlier. The "Hustlers" star and the "Argo" director were originally together from 2002-2004.