As children, we often hear comments that resonate one way or another and may impact decisions we make later in life.

Jennifer Aniston says she had one such impactful moment when she was 11 years old that remains a cornerstone of her sense of power today.

“I remember a parental figure saying to me around the critical age of about 11, after a dinner party, that I was excused from the table because I didn’t have anything interesting to add to the conversation,” Aniston said Friday at Variety’s Power of Women event.

Aniston continued: “I always felt incredibly comfortable giving a voice to the words of others but put me in a table full of strangers and I’d go right back to being 11 years old.”

'MURDER MYSTERY' STARS JENNIFER ANISTON, ADAM SANDLER SAYS WHO THEY WOULD PIN A MURDER ON

The “Murder Mystery” star added that she began coming into her own during her breakout run on “Friends,” when she started seeing herself “in a different light.”

“These last two years have really made me think a lot about the messages we send young kids — little girls especially,” Aniston lamented at the luncheon. “How the things we say and do can either build them up — or tear them down. And make them feel like maybe their voices don’t matter.”

“I started meeting all of these people who expressed to me how much the show meant to them — how it lifted their spirits during a bad breakup or got them through an illness. I was just so incredibly moved by that.”

Added Aniston: “And I began to change the way I thought about my own voice, and what it meant to have a platform to use it.”

The “Horrible Bosses” star will make her return to TV as an executive producer in Apple’s “The Morning Show,” a series that bears a resemblance to NBC’s long-running “Today” program and focuses the drama-filled, highly-competitive business of producing morning news. 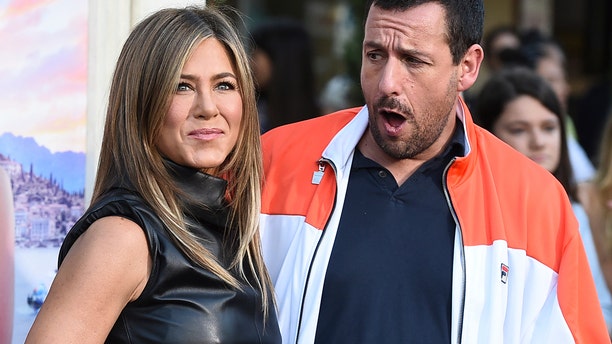 Aniston will star in the series for Apple’s forthcoming streaming service alongside Reese Witherspoon and Steve Carrell, with “The Office” funnyman portraying what appears to be a made-for-TV version of Matt Lauer.

Meanwhile, Aniston’s character – Alex Levy, also a news anchor – has been marked as “past her sell-by date,” by her male bosses, and must navigate her complicated personal and professional life while dealing with the fallout of Carrell’s character being suddenly and very publicly fired for sexual misconduct. Witherspoon plays a field reporter whom Levy believes could be gunning for her job.

“The Morning Show,” is slated to premiere on Nov. 1 on Apple TV+.