Jennifer Aniston seemingly called out Adam Sandler’s snub by the Screen Actors Guild Awards during her acceptance speech at the event Sunday.

Aniston ended up winning the trophy for outstanding performance by a female actor in a drama series for her part on “The Morning Show.” The 50-year-old star concluded her acceptance speech with a shoutout to Sandler that seemed to jab at the Screen Actors Guild and other award shows for snubbing his starring role in “Uncut Gems.”

“Adam Sandler, your performance was extraordinary, and your magic is real buddy. I love you,” Aniston said.

It didn’t take long for Sandler, who co-starred with Aniston in the 2019 Netflix original comedy “Murder Mystery,” to take notice of the shoutout and respond on Twitter.

“Congrats to the great Jen Aniston for her SAG award and her just being the best,” the star wrote in a tweet alongside a picture of Aniston accepting her award.

The former “Saturday Night Live” cast member was thought to be a front-runner for numerous awards for “Uncut Gems,” but instead ended up among the many actors and filmmakers snubbed by both the SAG Awards and the Oscars.

JENNIFER ANISTON WEARS SHEER DRESS AT SAG AWARDS: 'I WONDER IF [SHE] KNOWS HOW VISIBLE EVERYTHING IS'

Sandler, however, has remained relatively sanguine about not being nominated by either organization. 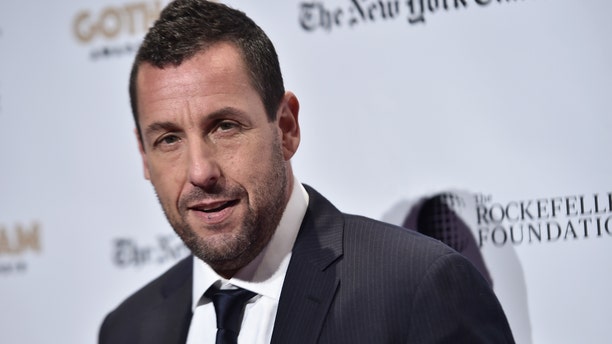 Aniston, meanwhile, got a lot of attention later on in the evening for her backstage reunion with ex-husband Brad Pitt. Pitt took home an award for outstanding performance by a male actor in a supporting role for his part as a slacker stuntman in “Once Upon a Time… in Hollywood.”