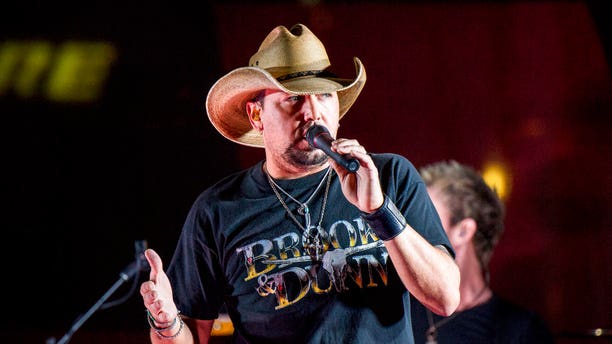 Jason Aldean is speaking out in his first interview since the mass shooting in Las Vegas that occurred during one of his shows.

Speaking on NBC's "Today" show, Aldean, who was on stage when a gunman opened fire on the crowd at the Route 91 Harvest Festival, said that he initially thought a speaker had blown when he heard a sound like a crackling over his in-ear monitors. After the shooting continued, he looked over to the side of the stage to figure out what was going on.

"When I turned to look, my guitar player had run behind me and was telling me to move, like 'Let's go,'" Aldean said. "And my security guy was running on stage telling me to run."

Fifty-eight people were killed and hundreds more injured in the deadliest mass shooting in modern American history after gunman Stephen Paddock opened fire from the 32nd floor of a hotel-casino. SWAT teams with explosives then stormed his room and found he had killed himself.

"Everyone was scrambling, just didn't know what was going on," Aldean said. "It was panic. That's probably the best way to describe it."

The country star cancelled some of his tour dates, but resumed touring about two weeks after the shooting. "Honestly being back on stage probably helped us more than anything," he said.

Aldean did not address gun control in the interview.

"At the end of the day, we're all in this together," Aldean said. "We spend so much time arguing with each other and not enough time like working on the issue that is really the problem."

Aldean was joined in the interview by fellow country stars Dierks Bentley and Lady Antbellum, who were all gathered in Nashville, Tennessee, on Sunday to raise money for hurricane and Las Vegas victims. The Country Rising concert, which also featured performances by George Strait and Chris Stapleton, raised more than $4 million for relief efforts.

"I just hope everybody can start to heal," Aldean said. "Some of this stuff you can never get over. I hope it gets better for everybody as time goes on.