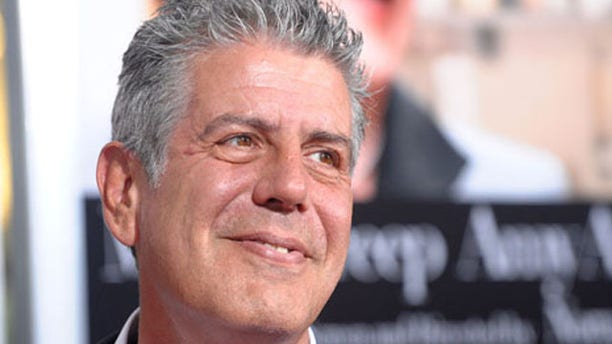 CNN may have found a solution to its flagging ratings: the S-word!

CNN must indeed be beaming as the show is pre-taped, and the network did nothing to bleep Bourdain’s cursing.

“Typically swearing is edited out with bleeping sounds when it is unintentional and/or inappropriate for the audience,” said Hollywood agent Alec Shankman. “Most reality and news shows make a point to edit it out.”

“CNN is clearly deflecting families away from their programming, and doing so rather proudly,” media expert Angie Olszewski told FOX411 Pop Tarts column. “It’s sliding down a slippery slope of classless unprofessionalism.”

Some critics are thus questioning whether this is exactly what Jeff Zucker had in mind when he officially took over as president of the network in January and set about boosting ratings.

“A television host can boost ratings one of two ways. Great TV or shock. It’s a disappointment to me when coarse language is used as an in-your-face way of saying, ‘Hey, notice me! I’m on TV,’” said Bob Waliszewski, director of Plugged In, which reviews films, TV, video games and songs for family-friendliness. “Will people notice? Sure. For a short while only.”

Pop culture writer Rachelle Friberg says that while profanity is a ho-hum event on a vast number of cable channels, this is different.

“CNN is a news-based channel that prides itself on being the so-called ‘most trusted source for news and information,” she explained. “Bourdain’s repeated use of a word of this nature is not only pushing the limits as to what is typically seen on a cable-news channel, but it illustrates the extreme attempt CNN is taking to boost viewership… All the profanity looks like a desperate attempt to stay relevant.”

While the FCC prohibits profane speech between the hours of 6 a.m. and 10 p.m. on broadcast television, on cable, anything goes. And not everyone thinks Bourdain’s four-letter words are out of place on CNN.

“Bourdain has developed a brand for himself and a good one at that. His viewers expect him to live up to that image,” branding expert Ari Zoldan argued. “If viewers want a clean show, they can watch Rachel Ray. If he tamed down his language, he would certainly lose viewers.”

Reps for Bourdain and CNN did not respond to a request for comment.